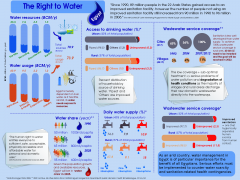 Water is indispensable to human life. As a basic need, it is highly vulnerable to exploitation and has been recognized as a human right in several international human rights treaties and declarations. Addressing the right to water in terms of sustaining life highlights how important proper policies are for securing health and welfare in human populations. One of the greatest challenges Egypt faces today is implementing appropriate measures to close the worrying gap between limited water resources and increasing water demand (see our infographic below).

The Right to Water, an Egyptian Perspective. Click to see full size. Credit: the author (CC-by 3.0)

Since the 1959 treaty with Sudan, Egypt has maintained a stranglehold on the Nile’s water resources, securing 75% of them for its own use. However, this treaty, so advantageous to Egypt, has been bitterly criticized by other Nile states: let’s not forget that the river actually flows through eight other countries besides Egypt. Introduced in 2010, the Nile Basin Initiative aims at granting access to the Nile’s water to the other countries. If the Initiative were ratified, Egypt would see its main water source diminished  – a worrying prospect as the Egyptian population keeps on growing and water share per capita already dropped below the UN’s water poverty line of 1000m3 per person in 2005. Thus far the situation is  one of relative water scarcity, but experts predict a certain water crisis in the foreseeable future.

Various ministries in Egypt are involved in water management with the Ministry of Water Resources and Irrigation (MWRI) taking the lead role. Although quite some effort has been put into improving the water supply and sanitation infrastructures, the MWRI remains clumsy and inefficient. Browsing its website in Arabic provides even less information than Wikipedia, while the English version stops its updates in 2009: I politely name this lack of transparency. But before getting into real badmouthing, I must confess my glee when stumbling upon this priceless budget plan. It dates from around 10 years back and shows astounding amounts of state money allocated to ‘consultants’ and ‘office renovation’.

Meanwhile, not only the quantity but also the quality of water is deteriorating as groundwater sources show abnormally elevated amounts of fertilizers, pesticides and herbicides. This has an immediate impact on health as nearly half of Egyptians live in rural zones where water is often only available from irrigation canals. Water treatment plants happen to be improperly maintained, and thus the water they produce is often contaminated with a wide range of micro-organisms. The neglected critical situation of slums also poses a serious problem as the water supply is unequally distributed within urban zones, and the poor suffer most from scarce resources and poor quality water.

Egypt is the only country to consider bottled water as a “medical food” in the same class as special food for diabetics. How long is the medicine going to be the cause of the ailment?