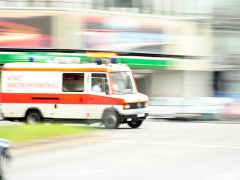 An ambulance in Sofia can arrive after two hours, if it arrives at all. Photo by extranoise on Flickr (CC BY 2.0).

“My mom called me in the middle of the day and said that I should come home immediately because some strangers had brought my father back after he collapsed in the street,” a very close friend told me. “So I took a taxi. When I arrived home, my older sister was already there and together with mom they were trying to talk to my dad. But it was no use. So we dragged him downstairs, got another taxi, and took him to an emergency department. He’d had a stroke.”

But my friend said: “Are you nuts?! You call an ambulance only if there is absolutely no other way you can get to an emergency unit!”

The sad truth is that the emergency care system in Bulgaria doesn’t work. It’s broken. You cannot rely on it. If you call 112, the ambulance may arrive in an hour or two, or it may not arrive at all, or it may arrive without the basic equipment needed to save a human life. Stories like these are commonplace. The truth is that in Bulgaria you call 112 only as the very last resort.

Emergency care is the kind of service that is effective only when every citizen can rely on it at all times. In Bulgaria though, it survives on the huge effort of the determined few who haven’t given up hope – the doctors, nurses, drivers and coordinators. Yet even though it just manages to survive, effective management, communication and coordination are just not there.

The lack of proper financing is only one part of the problem. Far more crucial is the lack of real reform.

The problems that need addressing include such things as:

–          There are not enough doctors and nurses working at first response. In Sofia alone, there are 100 doctors less than needed. There are now just 19 first response teams (a doctor, a nurse and a driver) serving a city of 1.5 million people, plus the nearby villages, and responding to 430 calls per shift. The basic problem here is very poor payment combined with very hard, stressful work. A doctor earns around 250 euro per month, which is less than what a bus driver gets in Sofia.  And instead of growing, the budget is shrinking – in Sofia in 2011 it dropped to €3.6 million from €4.5 million in 2008.

–          Poor organization, coordination and communication between hospitals, wards and emergency care units leads to hold-ups of up to two hours because the ambulance serves as a taxi taking patients to two or three or four or even five different hospitals before they are admitted –  if they are admitted at all and not just simply sent back home. Frequent reasons for non-admittance are lack of hospital beds, or patient’s lack of health insurance or because the hospitals estimate that they can lose money from treating patients’ serious conditions and simply decline to admit them. The upshot is that an ambulance can circle for hours in a city notorious for its traffic jams before it “unloads” its patients.

–          The long way a call travels before it reaches a first response team. Doctors complain that the coordinators receiving the 112 calls are not medics, cannot prioritize cases, and often make mistakes in forwarding information to the emergency care services central unit. This takes up precious time and resources, whilst also stressing the first response teams and putting human lives at risk.

Then there are the small things that might seem  to be insignificant but which end up hindering the work of the medical team. For example, the many hoax calls since there is no rule that ambulances are accompanied by a police car as they are in many EU member states, or have their own radio station on board.

All these problems could be resolved not just by pumping in more money – what is also needed is thorough optimization with considerable thought being put into how to make logistics, communication and coordination more effective to help the medical teams out in the field. What is really needed is a wave of true reform.