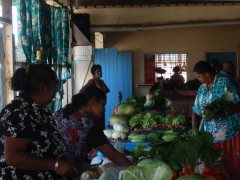 Fiji is a developing island nation and the majority of the population live in rural areas of the two main islands. According to a Fiji Bureau of Statistics report in 2009, 31% of the population lived in poverty, most of whom reside in rural Fiji. The situation is worse, with the current recession and withdrawal of vital aid from our neighbors Australia and New Zealand.

Not everyone has access to education in Fiji. I had a friend in high school who had to walk three miles from his village every morning to catch a bus to school. The situation in other, more secluded areas is the same, if not worse. According to Sian Rolls, a community radio producer and broadcaster FemLINK Pacific, rural women are affected the most:

“Most women in Fiji’s work force are in the informal sector. Things like market vending, making handicraft and assistants in shops or restaurants. If a family can only afford to put one child through school, a male will always be given priority because of the traditional mind set that men are the bread winners.”

According to Rolls these women are hardly recognized because they do not have a degree. Yet they are responsible for successfully managing their families and in many cases being bread winners. A major problem with this is that there is no saving of income. The little income earned by women without educations and their husbands are invested directly into food and other basic necessities. This means that if there is a disaster of some form, they have nothing to fall back on.

This is quite startling because women are an important part of  Fiji. Their contribution to the economy is already quite large but not fully recognized by the state. Ensuring women get equal access to education is vital for any developing country to grow successfully. There needs to be a representation from both sexes in the formal work force.

Fiji has changed a lot since 1970 when we gained independence. It has had four coups among many infrastructure and policy changes. There is a growing number of women in the work force now but back in the day it was believed that women belonged at home. More women are getting a college education and becoming leaders of their communities. Steps are already being taken by various stake holders to help make education accessible to more women. But with thousands of women, especially those living in rural Fiji denied education we must ask ourselves what more needs to be done.

There is a need for more schools around Fiji. Making education accessible to more women will give a much needed boost to the economy. There needs to be recognition so that there’s the provision of services and benefits that all workers should receive. Awareness is also necessary, especially in rural areas. People must understand that women are just as capable, if not more, as men and deserve a shot at education. Education needs to be equally accessible to every citizen of Fiji to build the middle class and empower its citizens.