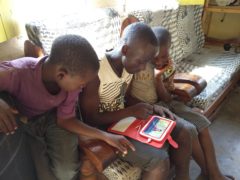 Tanzanians in rural areas that are undeserved by hydroelectricity are rising the demand for solar energy in order to meet their entertainment needs.

A recent study by Solaris Offgrid reveals that households in rural areas of northern Tanzania who want to own or have access to entertainment appliances such as computers and tablets are driving-up demand for solar systems.

Solaris Offgrid is a firm that manufactures Pay-As-You-Go (PAYG) systems solutions to foster affordable and sustainable energy access in off-grid areas. Working with Solaris Tanzania the firm assessed the energy needs of over 300 customers and prospects in Northern Tanzania could be powered by solar energy.

Households connected to solar energy now desire to own and power tablets_ beyond just lighting and heating. Photo-Solaris Offgrid.

“Multimedia is consistently ranked as the most interesting service to our customers, overcoming offers of more ‘practical’ products such as irons or refrigerators,” the study, Beyond Lighting: Evaluating the needs of rural communities (in Lake Zone, Tanzania), says.

People in rural communities want energy to power their gadgets so that they enjoy services like news and information from TV stations, websites, social media, watch multimedia in form of music, video and photos.

Apart from powering computers and tablets, the study reveals the need to power other appliances for both domestic and productive uses such as hair cutting tools, refrigerators, irons, soldering irons and irrigation systems.

This evolving trend, where energy usage among rural households has gradually moved beyond lighting and heating, is poised to further deepen the demand or adoption of Solar Home Systems.

The desire for solar energy has just gone beyond lighting, heating or charging. Househol aspire to own and power tablets with the energy. Photo-Solaris Offgrid.

In a few months time, Solaris Offgrid will work in collaboration with Microsoft to maximise the impact of offering greater access to multimedia and internet to households in rural Tanzania.
At the end of this partnership 7000 Tanzanians, especially the youth, will have benefited from 1000 content-rich tablets.

The computer tablets which are solar-powered will be loaded with educational content, providing an extra level of impact and accelerating access to multimedia use.