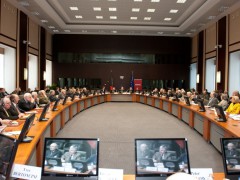 National leaders and EU officials often use bureaucratic language to obscure controversial policies. This not only serves to confuse and alienate European citizens, but it undermines the democratic legitimacy of the Union and this will have to change as it acquires more powers.

A view of the main conference hall. (Credit: Egmont Institute)

Last week’s high-level Belgo-German Dialogue took place far from your typical dour Brussels conference rooms, but rather was held in the elegant and beautiful Egmont Palace, built by an 16th Century noble and statesman, and the current home of the Belgian Ministry of Foreign Affairs.

It was also novel in that there was no English interpretation but all was said in the countries’ national languages of French, Dutch or German. The participants were also representatives of national organizations rather than veteran EU insiders. There was more authenticity, more character to the speeches and exchanges than the sometimes robotic, buzzword-laden Euro-English one hears from EU officials and Brussels lobbying groups.

It can seem a small thing, but it contributed to the frankness of the discussions even if the debate – on the “Agenda 2010” economic reforms passed in Germany in the early 2000s, credited for that country’s economic success but also for increasing social insecurity and imbalances in the eurozone – led to the most part to a fairly predictable Belgo-German split.

As George Orwell noted long ago, the use of language in politics is no minor concern. The lack of democracy at European level, that we can all see, is above all due to the need to respect national sensibilities. EU officials in Frankfurt and Brussels couch their speech in bureaucratic jargon, consensual platitudes and sheer verbosity so that, insofar as it is possible, no waves are made in any country.

This is because one country, especially a large one, can block a policy for the entire Union so as to protect its particular national sacred cow (say farm policy for France, financial services for the United Kingdom, monetary policy for Germany). As the editor of EUobserver, Honor Mahony, noted in a recent blog post lamenting the absence of “straight talk” at EU summits:

The EU leaders at the March summit “endorse” certain broad stroke “priorities” such as promoting “growth” or tackling “unemployment”. They reader thinks ‘déjà vu’ and ‘blindingly obvious’ in equal measure. […]

This [kind of empty talk] is partly due to having 27 people sitting around the table and partly due to a tacit agreement nobody should ruffle anybody else’s feathers.

It is by this kind of reasoning that the European Commission decided to reorganize its previous budgetary policies – the rather appropriately-named “Common Agricultural Policy” (farm subsidies) and “Regional Policy” (redistribution to poorer regions)  take up the overwhelming majority of the EU budget – under the new indecipherable headings “Sustainable Growth” and “Preservation and management of natural resources”.

This may help to push policy forward but it also leads to a citizenry that is confused and cynical for not being spoken to plainly and clearly. It also undermines clear democratic debate on these policies.

The question of democracy and international understanding is important because, now that we are living with a common currency, the actions of one affect all with far greater intensity than before. If the eurozone is to exist (not a given these days!), there needs to be a massive strengthening of European power.

As former German Chancellor Gerhard Schröder, who gave the conference’s keynote speech, said “one cannot have a common monetary zone without common finance, economic and social policies. […] This, for example, applies to growth initiatives, structural reforms, and proposals to strengthen the European institutions at the expense of the nation-states.”

Towards a European democracy?

The question then becomes: Who is to determine these common policies, who is to wield this European power? How can this power be democratic and transparent given the decidedly mixed record of EU government?

We are seeing democracy at work in France, where incumbent President Nicolas Sarkozy looks to be heading towards defeat in the face of Socialist candidate François Hollande. Should the latter win, the Fiscal Pact – mandates balanced budgets over the medium term by national governments – will have to be reformed, and its legitimacy will be greatly strengthened by having the bipartisan backing of both Europe’s Christian Democratic and Social Democratic traditions.

Europe’s leaders are also looking ahead. EU foreign ministers at a recent “reflection group” meeting reportedly considered the creation of a merged European Commission and Council presidency who will be chosen by the victors of the 2014 elections to the European Parliament. Surely the replacement of the current occupants – the unknown Herman Van Rompuy and José Manuel Barroso – by a common president, whose face would be known across Europe, benefiting from the legitimacy of an electoral mandate, would be a vast improvement on the current situation.

It would hardly be a silver bullet however. The power of national government to block things and rule by power would remain, as would the risk that the European Union become a dysfunctional “vetocracy”. As such the incentives to resort to Brussels Blahblah will remain. Beyond political and institutional changes, there needs to be a revolution in the entire working culture of national governments and Europeans institutions in Brussels and Frankfurt, to not portray every initiative as apolitical, self-evident and innocuous. But to genuinely debate and attack, as they would in national politics. Otherwise, the new Europe will simply be made without the citizen, and we’ve seen how costly this can be.

This would be an experiment and there is no telling if it would succeed. Many multinational unions have failed or, like Belgium or Canada, face recurring crises because of their ethnic tensions. But there are counterexamples too: India – for all its poverty, linguistic diversity, religious tensions and 28 states – is by most measures a successful democracy. And if the Indians can do it, why not us? There is no telling if a democratic Europe will succeed, but a bureaucratic one will surely fail.