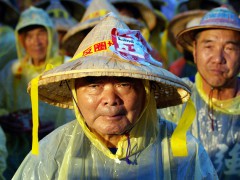 When my father was a little poor orphan during the war in China, he searched in fields for the remains of grains of rice and ate them with rats’ or birds’ eggs he found. And my mother as a child in eastern Taiwan coast, ate rice gruel mixed with sweet potatoes – two meals a day- if she worked hard enough. When my parents got married and had four kids in Taichung, a city in central Taiwan, they worked very hard in order to feed their children – my three older sisters and me – three meals a day with pork, beef, chicken, and anything we children loved to. But now, 29 years later the situation appears to be that I should/might be facing the same difficulties my parents were confronted with when they were growing up. I am married but even before I have children I am worried about the future and food security.

Farmers protested against land grabbing in front of Presidential Office on July 16, 2011. Photo by Coolloud. Used under CC-BY-NC

Food security – simply put- is the worrying about whether there will be enough food.It is one of the most unheard but grave dangers facing Taiwanese society. A recent article titled “What can we have 13 years later?” is spreading rapidly on  the internet. According to the author Peng Ming-Huei, a professor of National Tsing Hua University, if Taiwan continues in the direction of its present agricultural policies, we Taiwanese will have nothing to feed ourselves in 13 years.

Peng threw out a direct question:

According to Peng, rising energy cost and the unaffordable price of petroleum for cross-ocean shipping will be part of the cause that will kill global food trade. Research done by Oxford University reveals that this is likely to happen in 13 years. The report says that world production of petroleum will meet only half of world’s need in 2023. Or if the prediction of  World Energy Outlook— which foresees the price of each barrel of petroleum will rise to USD 200 in 2030–comes true, then the cost of shipping will get too high to continue cross-ocean food trade. Food exporting countries will also cut their production because it will be too expensive.

Actually something like this already happened in 2008 when the petroleum price rose to 120 USD per barrel. At that time Taiwan suspended importing sweet corn from the U.S and gave special permission to import it from China. The follow-up question is: Can China be the alternative when China’s food self-sufficiency rate is only 95% and dropping?

Taiwan used to enjoy self-sufficiency in the agricultural industry. Before 1968, Taiwan’s rate of food self-sufficiency was over 100%, but in recent years (the past 7 years) this security rate is hovering around 30.5% to 32.4% only – far lower than China’s 95%, USA’s 128%, France’s 122%, or Japan 40%. My generation is much richer in GDP than my parents’generation, but our agriculture and food production is of poorer quality, but surprisingly most of us are not even aware of it.

China can be an alternative, if we dare to try.  In China 78% of waste water is dumped into rivers, lakes and coastal sea areas without any processing. Polluted land and water supplies are rapidly increasing in there. For example, more than 40% of the total farming fields were polluted by heavy metal in Pearl River Delta, according to a study of China’s Ministry of Environmental Protection. A recent article on China Dialogue also mentions it:

“Weng Lida, former head of the Yangtze River Water Resources Protection Bureau, has been quoted as saying: “Half of all China’s chemical industry is in the Yangtze basin. A Yellow River’s worth of domestic and industrial waste water flows into the Yangtze every day.” ”

Taiwan is not doing any better than China. The “science industrial parks” all around Taiwan which manufacture millions and millions of wafers, netbooks, LCD screens, iPhones and iPods, have been fiercely invading Taiwan’s agricultural sector for the past 20 years. Using vast volumes of water and creating air and land pollution with enormous governmental support with cheap land and water prices.

The only way to maintain security of food will be for citizens’ to keep a strict examination on government policies and consumers’ support to local agriculture. In Taiwan, local farmers and herders average income is TWD 202 thousand (6120 USD) a year, far less than the national average income. The social and economic status of farmers is so low that many parents do not want their children to become farmers – “producers of food”. The average age of rice farmers is about 60-70 years.

It’s sad to note that before the onslaught of a severe food and energy crises, we will see the demise of agriculture through the death of these old farmers!