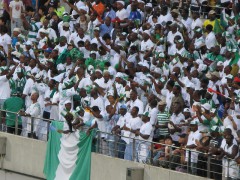 Nigerians love their football – full stop. From fanatically following leagues that are as far from them as the heavens are from the earth, to religiously having faith in the Super Eagles to deliver (many times in vain), Nigerians do love their football.

I can neither wrap my head around the almost palpable passion nor around the game itself, but there are a few unmistakable things I have noticed and numbered below.

And somehow we always act genuinely disappointed when they don’t do well. Hilarious.

This fourth point has to be the worst hit by the rising insecurity in the country though, as people are happy (and feel safer) to watch these matches in their homes, away from the crowded joints Boko Haram are wont to attack. That’s when they’re not attacking military barracks, even filming as they go.

And even if people wanted to go out to watch the matches with their peers, scream themselves hoarse in the frenzy that always accompanies the sport, they’re not allowed to, especially in the North East where the military ordered the closure of all potential viewing centers based on intelligence reports of impending attacks.

Who have you tipped to win the World Cup? I say Nigeria, because we have God on our side.