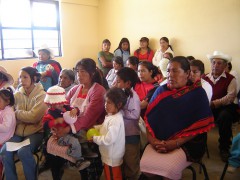 “De Panzazo”, a 2012 documentary directed by journalist Carlos Loret de Mola, exposes Mexico’s failures in education throughout the last century. A popular expression meaning “barely approved” in English, “De Panzazo” presents a concise, captivating, and even humorous overview of the Mexican education crisis, claiming that both public and private schools have something in common – both have an “equally impoverished level”.

In spite of investing 21% of Mexico’s overall budget in education, results from the Program for International Student Assessment (PISA) demonstrate that Mexico is left far behind in regards to education. Only 0.7% of the Mexican students achieved the higher grades (5-6), while in the USA or Spain it was around an 8% and in South Korea more than 25%. As Loret de Mola says in the documentary, it would take Mexico 327 years to get to the first place of educational levels if the current growth rate remained constant; ironically he adds, it would have been a good idea to start back when we were “New Spain” instead of Mexico.

So where does all that money go? The documentary states that 93% of the 520 millions of pesos spent on education this year will go to salaries, from which an unknown –very likely enormous– amount is lost in the professors´ syndicate, which has been directed by the commonly known corrupt Elba Esther Gordillo since 1989.

The government seems not to be doing much about it, probably due to political factors such as the strength of the syndicate and the incredibly powerful position that Elba Esther has gained over the years. And the people haven’t to been able to act either. The syndicate of professors is rotten by corruption, there is no control on who teaches and how he does it, the money is lost in mysterious ways, and there is no coordination of educational institutions.

Even though most of the Mexican population completes primary level schooling, the amount of people studying the next levels gradually decreases. Only 36% of Mexicans finish high school, 20% finish a bachelor degree and only 2% study a master or doctor degree. In contrast, in the USA around 75.5% of Americans complete high school (this percentage may vary depending on the source from 65% to 85%) and 58% a bachelor degree.

Why does this happen? Economic reasons and excess of demand for a limited supply of good universities seem to be the culprits. Families have to either be able to pay for some excellent expensive private schools or have good luck and get one of the few places on a limited number of public institutions.

Picture taken by Fanny Meneses. It shows a rural school in a Mazahua community in the Estado de México.

Neither of these two options guarantees education for poor families, which represent 44% of Mexico’s population according to UNICEF.

As Blanca Vera and Amaya Querejazu argue, searching within the government for solutions to Mexico’s education problems may not be the best option anymore, and I totally agree. Nevertheless, asking for the help of private companies based on the idea that cheap skilled labor could be a reason by itself might not be the answer.

Private-public partnership could be a viable solution, but the real outcome of such cooperation would have a bigger impact on avoiding the huge current levels of inequality than simply on the labour market.  The small percent of entrepreneurial individuals that exists behind these huge private companies must start considering that life based on fortresses created by inequality is not real life, and that cooperation through increasing the level of education in their country is the only possible way out.

Wouldn’t it be worthwhile to devote some of our efforts to stabilizing the equality of society through creating opportunities for the people via education instead of just profiting for pleasure? Wouldn’t it be better to wander around a free city instead of living in fear behind barriers paying for special protection, cameras, alarms, private security, and probably even kidnap fees?

In short, limited quality education options spurs inequality, thus insecurity in developing and third world countries. This fragile interconnection is the reason why it is the responsibility of the whole society to organize in such a way that it is possible to leave this feudal system and increase the living standards in our country.

It is the duty of the government to provide education as far as it’s possible. The duty of the private sector is to be conscious and work as a checks and balances system by cooperating to solve what the public sector hasn’t been able to accomplish. And finally, the role of the society is to be humble, accept this initiative, and support it via responsible learning rather than pure complaining. There is no divine solution; everyone must work from it’s own trench.

Photograph taken by Daniel Kapellmann. This is governmental propaganda with orthographical mistakes, the correct written form should be: “Salud” and “Infórmate”. Next to it, there was another one saying: “Más Educacion”, also without its proper accent: “Educación”.