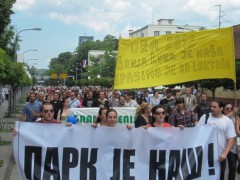 “Yugonostalgia.” It’s an expression that suggests many things at once. Generally, it refers to a feeling of longing for “the good old days” felt by citizens of those countries which comprise the former Socialist Federal Republic of Yugoslavia. A recent survey shows that among all the former Yugoslav republics, Bosnia-Herzegovina has the second most Yugo-nostalgics (59.1%), following closely behind Serbia. This is not surprising for a variety of reasons. Though they’re hard to measure, one of them may be that Bosnia today is beset by arguably the most serious economic and social problems of its neighbors (with the possible exception of Kosovo).  Estimates show that around 40% of the population is unemployed. Pensions are meager. An inconceivably labyrinthine governmental structure, built on ethnic divisiveness and plagued with rampant corruption, obstructs progressive change. Many Bosnians with whom I have spoken refer to the former Yugoslavia – all problems aside – as a “golden age,” both economically and socially. To what extent this might (or might not) be a rose-tinted vision of the recent past is beside the point. What matters is that people have a memory of times when life was better.

Nostalgia and frustration with the status quo can be useful, to a degree. But only if they lead to action. It is interesting, then, to ask what Bosnians are doing today to create a better life, particularly in a time when “Occupy” movements and other large-scale protests have swept the globe. Instinctively, one turns to the capital city of Sarajevo for a glimpse of what’s going on. Of course, there are a number of active, cause-driven citizens’ initiatives in the city. Yet, as far as I am aware, there is no sizeable collective movement in Sarajevo today. And while a local Occupy movement does exist in Sarajevo, its presence has been slender and inconstant.

With respect to citizens collectively demanding change, it is Banja Luka, the second largest city in the country, that has recently taken center stage. It was there that a unique protest emerged last spring. Initially called “Save Picin Park” [“Spasimo Picin Park”] and subsequently referred to as “The Park is Ours” [“Park je Naš”], the protest was first organized in May 2012 to stop real estate developers in cahoots with the municipal government from illegally destroying and building over a historic public park in the city. Though the protest was ultimately unsuccessful in preventing the destruction of Picin Park, it touched a nerve among citizens and morphed into a social movement calling for greater government accountability and social/economic reform. The flurry of local media coverage it received has made it clear that the citizens of Banja Luka are fed up and unwilling to remain silent any longer. One indication of the movement’s potency is the 38,597 people who are now members of its Facebook page (at the height of the protests, there were over 40,000). And while social media may not offer an accurate reflection of the size, power or intensity of a movement, it does provide an indication of visibility and influence.

A Park je Naš protestor uses a vuvuzela to make sure she is heard. (photo by Aleksandar Trifunović)

Miodrag Dakić, president of the Banja Luka-based NGO Center for Environment [centar za životnu sredinu], has played a vital role in the movement. In a recent report on its status, he wrote, “’The Park is Ours’ differs from all previous public protests in Banja Luka to date in the sense that it is the only one which has had the goal of systemic social change. Most previous protests had very narrow, short-term goals, and most demands were aimed at meeting the needs of one group of citizens.” The Park is Ours, by comparison, transformed from a park protest to a collective movement aimed primarily at structural issues such as corruption, nepotism, lack of transparency, insufficient equality across demographic lines, inadequate social care, a dearth of free media and a languishing economy. Among the culprits the protestors want held accountable are politicians, particularly the recent Mayors of Banja Luka, Dragoljub Davidović (2004–12) and Slobodan Gavranović (2012–present), and the president of Bosnia’s Serbian entity (which includes Banja Luka), Milorad Dodik. One of the most significant achievements of the protest, said Dakić, is that it pressured the City of Banja Luka into announcing and organizing open administrative hearings. But, Dakić added, only time will tell if this was merely a gesture to appease citizens in the run-up to the October 2012 elections.

This past summer I was in Banja Luka for several days and had the opportunity to participate in the protests first-hand. I saw for myself that, each day, a mass of citizens, usually numbering in the 100s (though it is estimated that once there were between 1,500 – 2,000), would gather under a certain oak tree in the early evening in the city center to raise their collective voice and make their presence – and their demands – known. On at least one occasion, the protestors simultaneously organized a food bank for single parents. The whistles, signs, shouting, petitioning, organizing online and offline and marching through the streets – come rain or shine, day after day – in defiance of intimidation tactics practiced by the authorities – maintained momentum for a considerable period of time: beginning in May 2012 and peaking in the lead-up to local elections on October 7. The movement continues today, albeit with reduced intensity since the October election of Mayor Gavranović.

One would be too quick to be skeptical of a movement which did not meet its original goal (preventing the destruction of Picin Park) and which has begun to scale down its street-level action in recent months. Rather, I think it’s important to recognize that the protest’s duration and success in articulating a series of clear, collective demands and goals marks a milestone in Bosnian history and represents an enormous step towards building a thriving civil society. Undoubtedly, the movement has set a precedent for the future. Despite some feelings of disappointment about unrealized aims and large questions about what’s to come, participants in the citizens’ initiative The Park is Ours have formed a coalition of solidarity which will make it easier and more likely for peaceful protestors to organize in the future.  It is also important to note that, as Dakić says, The Park is Ours has received support from NGOs, groups and individuals all around Bosnia-Herzegovina, including Sarajevo. This indicates that, to some extent, the initiative has succeeded in transcending geography and divisive inter-entity politics.

Indeed, the Banja Luka of today is markedly different from the Banja Luka of last year, thanks to the actions of a committed group of citizens with a vision for their common future. This in itself is a remarkable accomplishment – and a hopeful sign – which should not be overlooked.

A strong police presence was not uncommon during “Park je Naš” protests in Banja Luka. (photo by Sofija Grmuša)