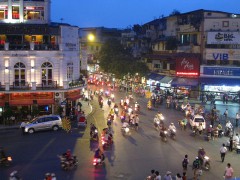 Researchers from the Asian Trends Monitoring (ATM) team took a look at alternative futures in Hanoi and developed four very different scenarios for how the city’s entrepreneurs would do in the year 2035.

The Vietnamese capital is undergoing several drastic changes. The city’s look and feel are changing, and the city’s inhabitants have evolved their preferences and demands. This presents new risks and challenges that policy makers must juggle. Thus, the kind of choices that city planners take will heavily influence Hanoi’s aspiration as a modern and inclusive metropolis.

The Asian Trends field survey indicates that health services, good schools, work opportunities, and financial services are the most critical unmet needs of the poor. Finding solutions is especially urgent due to the population pressures caused by growing share of rural-urban migrants trying their luck in the “big city”. Current strategies will fail: slum clearing and restrictive eligibility criteria for government benefits are short-term strategies to drive people away from Hanoi, but these disincentives are no match for what the city has to offer.

In order to equip planners with a framework to base their policy design, we have developed four alternative futures for Hanoi. They are centered along two critical junctures:

2) the service delivery method for the urban poor.

Both of these issues were discussed at length in ATM Bulletin 18: Empowering Hanoi’s Poor. The combination of those critical junctures produces the following four alternative futures:

To simplify the comparison of the alternative futures, three criteria will be used to evaluate the different outcomes: pace of economic growth (P), inclusiveness of the economy (I), and quality of life for the lowest income groups (QoL).

A decelerated pace of rural-urban migration would allow urban infrastructure to catch up with population levels. Additionally, a concerted empowerment strategy would enable the poor to participate in turning Hanoi into a dynamic metropolis. The city would have a vibrant economy with micro-entrepreneurs competing alongside big businesses. A mix of government and NGO-run training centers would ensure that micro-entrepreneurs learned the necessary skills to develop their businesses.

A controlled population level leads to manageable competition and bigger profit-margins for small businesses such as street-vendors, kiosk owners and tuktuk drivers. Access to practical training, even for those with only limited schooling, would improve job opportunities for the lowest income groups. With the ability to afford basic services, these groups would achieve better social integration and higher social capital in their neighbourhoods.

The “poor” would enjoy good levels of inclusion, socially as well as economically. However, these benefits come at the cost of excluding a number of would-be migrants that will be denied entry to control population levels. Also, the required policy adjustments would also slow down economic growth due to the shift away from a strict GDP growth target.

This alternative future requires a way to harness and control the trend of rapid urbanization, which is not an easy feat. One policy, already in place in Laos, is creating secondary cities in other parts of the country to draw attention away from major capitals. Policy reforms to attract businesses to small towns, as well as investments in infrastructure in underdeveloped areas, could support this move.

This future also requires extensive investment into skills training and capacity building for the urban poor in addition to creating a supportive business environment for Small- and Medium-sized Enterprises (SMEs). For successful examples in these massive skills training programs, planners can draw inspiration from the workfare and retraining programs in the USA and European welfare states. In the short run, direct provision of basic services to the urban poor will still be required while waiting for the participation rates of the training programs to increase.

In this future, the city planners embrace both trends. Planners see rapid rural-urban migration as a chance to transform their city into a vibrant marketplace and an engine of economic growth. Public institutions realize the need to respond to the urban poor’s needs while minimizing the risk of dependency. Extensive programs to facilitate social integration of rural-urban migrants into Hanoi’s economy and broad-based support for initiatives to train and work with the poor will be put into place. The city’s growth strategy will be based on start-ups, social enterprises and a diverse range of affordable or free training opportunities for Hanoi’s poor. Rather than providing hand-outs, the support for the urban poor will be focused on enhancing productivity and self-reliance. While slums and poor living conditions are likely to occur in the short term, over time they will organically improve due to the increased income levels of the poor. Quality of life would be slightly lower due to effects of crowding, pollution and difficult living conditions, but improvements will come as the infrastructure catches up with population trends.

Policy measures:
In order to shift the entrenched historical pattern – poor service delivery, high social exclusion and lack of opportunities for the urban poor – towards a scenario of vibrant self-reliance, Hanoi’s policy makers must step into uncharted territory, as this model in its entirety has never been seen before.

Planners must improve the business environment for SMEs and micro-entrepreneurs, representing a significant shift from the dominant paradigm of economic growth led by big businesses. This may antagonize big businesses to some extent, so the political fallout must also be addressed.

Empowering the lower income groups towards self-reliance is neither cheap nor easy, since it would require setting up and scaling training opportunities and inviting social businesses to employ large numbers of new migrants. This aspect of the plan can emulate the Bangladesh model, where social businesses are thriving and are a large source of employment for the poor.

The third scenario sees rural-urban migration slowing down through policies of control and exclusion. This would increase the quality of life for Hanoi’s established residents, due to a preservation of population density and lower competition over scarce resources. However, this will further marginalize the urban poor. The deficits in service provision would be tackled through extensive direct service provision and social welfare programs. There would be an expansion of government services such as water, health care and electricity, both in quantity and quality, with NGOs providing services to the remaining gaps. In the short run, this would result in quality of life improvements for all of Hanoi, especially the poor. However, preserving these outcomes puts a strain on public budgets.

Overall, the quality of life would be acceptable for the lower income groups. Although Hanoi’s poor would be able to survive off these services, they would still experience social exclusion, a growing dependency on the government, and no real prospects of improving their livelihoods. A comprehensive social protection system cushions some of the negative impacts, but would not address the issue of rising social and economic inequality over the long run. Finally, with a priority on big businesses and the traditional economic development model, economic growth would be high, but would not be inclusive and would result in social stratification.
Policy measures:
This model of development resembles the China model for rapid growth. Rural-urban migration would be discouraged with tight eligibility criteria and bureaucratic hurdles to settle within the city boundaries. The China example, however, shows that there is the risk of creating a large class of illegal migrants.

The economic approach would continue to focus on large scale investments and a favourable environment for big businesses. The government would be willing to invest into direct service provision and improve access and quality for those falling under the eligibility criteria.

The final scenario comes into effect if rapid urbanisation continues and the government continues its traditional approach of service provision in Hanoi. This is a ‘business-as-usual’ and ‘do nothing new’ scenario which underscores the unsustainability of present policies in the context of key trends, issues and trajectories. Existing challenges such as poor urban living conditions, service deprivation and economic exclusion would worsen over time as the infrastructure development struggles to keep pace with the rising population. Frequent bottlenecks and breakdown of infrastructure in the transport, health, sanitation, and education sectors would drive a shift towards private service provision reserved for the affluent residents of Hanoi. Living conditions in poorer neighbourhoods would worsen and slum-like settlements would form. Public services available to the poor would be difficult to access and mostly of low quality due to overcrowding effects.

Overall, the quality of life would be low across different income groups, even for the more affluent due to bottlenecks in transport, higher pollution and increasing crime rates. The city would become more and more divided, economically, politically and socially. In the medium run, the economy would enjoy high growth rates, but eventually issues with infrastructure would negatively affect the city’s growth potential. In essence, this scenario is the current condition of most poorly-planned megacities such as Mexico City, Jakarta, and Manila.

Policy measures:
The government will continue to push for urban modernization, often at the expense of the less educated and marginalized urban constituencies. Crowding effects will be addressed “after-the-fact” in a reactionary way through slum clearance and gentrification. Service provision will shift towards further commercialization leaving the less prosperous with insufficient low quality service infrastructure in a city bursting from its seams.

Towards a desirable outcome

It is clear that planners are under immense pressure to make decisions that could change the current trajectory of Hanoi’s development. Of these four scenarios, only one scenario is clearly undesirable: the breakdown scenario. The other three scenarios have their own merits and weaknesses. “Controlled, inclusive growth” dampens the growth potential of the city, “vibrant self-reliance” requires the most effort from the part of the government, while “improvement through exclusion” can be politically complex.

Choosing between these scenarios requires extensive dialogue and strategic cooperation with the relevant stakeholders, including the poor. Unfortunately, the voices of the urban poor are usually among the least prominent in the discourse over choosing future development paths. We hope that these scenarios will inform the public and initiate new dialogue to decide which future Hanoi’s policy makers and inhabitants envision for themselves.

Here you can read a detailed description of the criteria for scenario evaluation.

Want to find out more about this?
If you want to read more about poverty alleviation efforts in Hanoi, download the complete Asian Trends Monitoring Bulletin 18: Empowering Hanoi’s Poor. In it, the ATM team discusses the different strategies for poverty alleviation that would be more effective in improving the lives of the poor without putting additional strain on the government budgets.