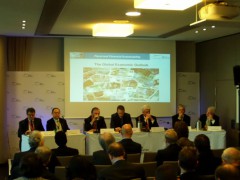 The panel of “The Global Economic Outlook” session. Photo by the autor.

Perhaps unsurprisingly, the GES session on the Global Economic Outlook kicked off with the issue of the U.S. government shutdown. Of course time was too short to do anything but scratch the surface of such a portentous topic, but there were a couple of things mentioned that do have a true global dimension: political dysfunctionality and the social contract.

Now I found it particularly curious to hear these terms applied to the United States, which is normally the (self-proclaimed) paragon of democracy and the economic model for the whole world, when usually we hear them applied solely in reference to “developing” nations.

If the speakers – bankers, directors of NGOs and senior managers of transnational corporations – were concerned about the affairs and problems of large powers, mainly the U.S. and China, they were also worried about emerging markets. Yet it is worth asking if such interest is sincere or merely economic in nature.

The guidelines mentioned by the panel that could define the near future of the global economy included such things as the problem of public debt in the U.S., and other first world countries, China’s growth (about which they warned people to have more wary expectations), the problem of public spending in developing nations, which tends to be slow, minimal, and sometimes misguided, and the role of Central Banks, which by an almost unanimous opinion the panel felt should be rethought in order to improve their current capabilities.

Among the issues left in the pipeline or barely mentioned was the role of climate change in the global economy and how this will affect product and country markets.

The role played by technology was spoken about as a paradoxical one as when one panelist mentioned that “the paradise of connectivity is generating problems for the global economy” . The part technology plays in revolutions and social movements has not only political repercussions but also directly affects the supply and demand for certain products, for example.

Despite not being a very inclusive talk (Africa was mentioned only once, for instance), and although it was guilty of having a vision excessively focused on the first world, the actual topics discussed were quite interesting.

It might have been better to extrapolate a bit and apply this discussion to Latin America or Africa, and think about which countries there are at risk of collapsing and closing their public services. Which country tends to be the economic leader in each of these regions? If the Central Banks in these countries were improved, how many economic problems would this rid us of? Will our governments be inclined to accepted necessary changes and leave ideological mantras aside?

The mere fact that I have to think about these questions, I believe, tells us that this supposed global view of the economy in reality is not really that global at all.