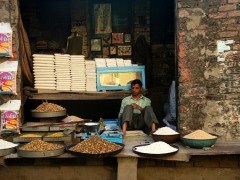 This post was produced for the Global Economic Symposium 2013 to accompany a session on “Towards Sustainable Consumption.” Read more at http://blog.global-economic-symposium.org/.

“In no case should we allow citizens to go hungry.”

It is in this context that the landmark National Food Security Act of 2013 has been passed in India. The Act is an attempt to guarantee food security for “priority and eligible households” — up to 75% of the rural population and up to 50% of the urban population. The ensuing debate about the food security bill is indicative of what ails and what might help the sustainability agenda. Here are a few key observations.

While the Food Security Act aims to entitle people to food, the PM is actively advocating that small farmers give up farming. According to the latest Census data, there are nearly 15 million fewer farmers than there were in 1991.

The greatest enemy to sustainable food security is this inherent dichotomy of policies. On the one hand, food production is being disincentivized, and on the other, distribution is being guaranteed. India has seen a jobless growth and has no clear roadmap for growth in livelihood. The question to be asked here is who really benefits. The track record for such “schemes” has not been encouraging. And if the guaranteed marketplace is not being serviced by India’s small farmers, some point to a possible advantage being passed on to the global agribusiness corporations.

For sustainable food security, shouldn’t security of food production and livelihood be a prerequisite?

The corporate media has been vocally opposing the bill with the flawed argument that the act will burden the economy further. Over the last century, the obsession with financial focus has resulted in skewed priorities. Jean Drèze points out the difference between the economic costs and financial costs of the bill: why an investment in the country’s well-being is essential to the “growth” of the nation. A growth figure as imagined in GDP figures does not take into account the well-being of the masses or the vector of disparity in wealth. GDP and other such measures really are merely irresponsible abstractions, convenient shorthand to assess a small part of the bigger picture.

3. Priorities of the policymakers and lobbyists

The bill will have an incremental financial cost of around Rs. 250 billion, (I would have given a currency conversion here, but the rupee is in a terrible tumble. By the time you read this, the conversion rate might be miles apart from what it is now.) which pales in comparison to the cost of just one scam (among many) that came to light this year: the water irrigation scam in Maharashtra. The scam cost India Rs. 700 billion, and the man responsible brazenly walks free and holds public office.

Tax exemptions given to Indian industry in 2012-13 alone were Rs. 5 trillion. Fuel subsidies cost India around Rs. 1.6 trillion. Yet, these costs have never invited such sharp criticism.

Another scam that came to light this year happened under the watch of the PM: the coal scam. The cost of this scam to India is pegged at Rs. 1.86 trillion. Bizarrely, the relevant ministry files that would have been instrumental in building a case against the perpetrators of the scam went missing when the investigations started.

Surprisingly, the cost of the food security bill has elicited a stronger reaction among corporate media outlets and the political class than the cost of the various routine scams that are wringing the country dry.

4. The illusion of control and the economy of corruption

Sustainable distribution systems must either confront the reality of the limits of control and the economy of corruption or, preferably, dismantle the system in favor of a universal system employing empowered stakeholders, as is done in Chattisgarh.

One feels that the key ingredient that will make a difference is the will to create a change and idealism to fuel it through its journey. The idealism can be sustained only when the various sections of society empathize with each other. In an environment where the upper classes feel the survival of the poor as merely a burden — a cost — we are setting a terrible precedent for the future generation — a generation that will grow in gated walls of anxiety and ignorance.