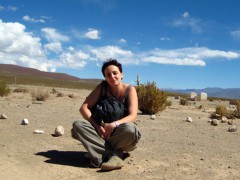 Karine in Jujuy, a province of Argentina | Image provided by Karine Aggery from her personal collection.

She grew up in France, lived in Germany, moved to the USA, married an Argentinean, and stayed six years in Buenos Aires. Now, Karine Aggery has been in Brazil since January, and she recently shared her experience with me.

I met her in 2011; we work at the same company. Now that we have known each other for almost a year, I can say that she’s a contemporary women; that’s how I define Kiki. She combines characteristics of the 21st century in her own way and still lives a peaceful life, even outside her country and far from her family.

I believe that when we think about migration policies, we have to focus on the immigrants — why they leave their countries, their backgrounds, their wishes. And, most important: immigrants are not criminals. Kiki is a great example of that: she is a person who simply wants to know more — more countries, more people, more culture.

French, German, English, Spanish, and a little of Portuguese: the languages she can speak. Açaí, real French crepes, American series, and Nutella: some of Kiki’s passions. Ati, Toti, Lilu, and Astro: her husband and their three cats, who are her family here.

The questions below reveal a little more about her — what her life was like in the various countries, her impressions and opinions, and the reasons she has traveled so much.

Did you always want to leave France? Why?

As a kid, I always dreamed of going to the United States. My fascination grew as I got older, and during my last year at university, I took off and finished the practical training for my degree in the United States. At that point, I did not know if I wanted to leave France, but I was very much tempted by the idea of experiencing something new in the United States for a while. After I spent a few months in Seattle during my practical training, I traveled to San Francisco and then to New York. Upon returning to France, the only thing I kept telling myself was, “Ok, I really need to go back to the States, and this time I’d like to stay.” This was around 1997. I “officially” made my way to the States in 1999.

How did you choose the USA?

Fascination. As a teenager, the United States seemed like the land of progress compared to “old Europe.” I was in awe with modernity, skyscrapers, a more modern environment, a certain freedom, and yes, the American dream. My fascination included everything from the history and architecture to its progress and the mentality and openness of its people. I absorbed practically everything coming from the United States.

In general, how was your quality of life in the USA?

When I moved there, I was 24, so everything seemed so easy. I was really happy just to be in the United States and therefore considered my quality of life to be a good one. I had made it to the States, and that’s all that mattered at first. I was introduced to the roommate system, sharing an apartment/house with other people, something not so developed in France back then. It was a really good experience, meeting new people who became really good friends.

What were your main difficulties in the USA?

Arriving in the States at 24 with no job waiting for you is tricky. And, at first, working small jobs wasn’t enough to sustain myself 100% financially. I had to depend on my parents’ financial support for a while. Looking back at it now, I have to say they made it possible for me to live there comfortably until I could get my papers in order and secure a stable job.

Why did you leave the USA?

In 2004, I met my future husband. We both worked at an educational entertainment company, although he was also working for a company in Argentina. Between my visa, which was about to expire, and my desire to be with him, I knew my time in the States was coming to an end. In June 2005, I left San Francisco and moved to Buenos Aires.

Karine in San Francisco, where she lived for six years | Image provided by Karine Aggery from her personal collection.

In general, how was your quality of life in Argentina?

Very good. When I arrived, in 2005, the cost of living was very affordable compared to the United States and some European countries. Argentina was successfully recovering from the 2001 economic crisis, but for me, arriving from the United States, everything was a lot cheaper! This changed over the years with the soaring inflation that’s still shaking the entire country. During the seven years I lived in Buenos Aires, the inflation kept increasing. When we left early 2012, the economic situation, and country as a whole, looked a lot different than it did when I first arrived in June 2005. Nonetheless, on a daily basis, I have to say that my quality of life was better in Buenos Aires than in San Francisco.

What were your main difficulties in Argentina?

I can’t think of any. Maybe the only thing was that, at first, as I did not speak Spanish, it took me some time to adapt and feel fully comfortable in a new country whose language I did not speak. Once the language barrier was overcome, and with the assistance of my then-boyfriend, everything just went smoothly.

Until then, you were more accustomed to living in rich countries. Were there differences moving to Argentina? If yes, what were they?

Moving to Buenos Aires, I knew I was going to one of the most developed countries, and the third-largest economy, in Latin America. But during my seven years in the country, I could only see the decline of this very-much-European-looking city that is Buenos Aires — economic instability, infrastructure being frittered away, political corruption, total mistrust in the financial institutions. After California, where everything runs smoother, arriving in Argentina, things looked — on occasion — a bit chaotic.

Again in San Francisco, where she met her husband, Atilio | Image provided by Karine Aggery from her personal collection.

In general, how has your quality of life been in Brazil?

A job transfer from our Argentinean company to the Brazilian branch — that’s the reason I came to Brazil. We’ve been here eight months, and so far so good. The only snag is, because we don’t speak Portuguese well, we often struggle and fear talking easily with the locals. If I spoke better Portuguese, my time in Sao Paulo would be even more exciting.

What have your main difficulties been in Brazil?

I’ve got to say it’s the language!  I’m really struggling with Portuguese. I was told that being French and knowing Spanish, Portuguese would be a piece of cake. Well, I can say that it is not! I’m finding it difficult — a lot more difficult than Spanish, for example. So, really, our main difficulty is the language barrier. Apart from that, Brazilians are absolutely fantastic people and, I’d say, even more welcoming than Argentineans. Therefore, integration is a lot easier.

Comparing all the countries in which you’ve lived, which one would you recommend for a war refugee, for example?

This isn’t an easy question. I believe it all really depends of the situation you’re in. For example, if you’re trying to escape a country in Latin America, I would say that Argentina would be a good option, and depending of your education level, it could be even more interesting, as education’s free in Argentina.

Let’s talk about bureaucracy. What were the main differences among the countries in which you’ve lived (documents, etc.)?

I’ll focus only on the immigration process, since as an expat/immigrant, that is always the most problematic part. I have to say that immigration in the States is a very difficult, demanding process. Europe, since about a few years back, has started to opt for the same strategy. Depending on where you’re arriving in Europe, some countries can really turn the entry process into a nightmare. Now, Argentina is the complete opposite, and so is Brazil: no questions asked, no need to show a return ticket, no one asks you anything. ­

Regarding the paperwork/residency process, every country has its ups and downs. There isn’t a country where the bureaucracy’s easy and fast. In every country, I had to be very patient and take things one step at a time. But if I had to classify one country as being the most problematic and nerve-racking, it would definitely be Argentina; the immigration/residency process in Argentina has been quite a long journey!

Do you intend to live in other countries? Which ones, and until when?

Definitely. Brazil is only a stop in our quest to find THE place we’d like to settle down. Being from Europe, I’d like to go back there; cities like Barcelona, London, Amsterdam, and Berlin are on my list. But countries like Canada and/or the States would be other possible options.

The French-Argentinean couple in Machu Picchu, Peru | Image provided by Karine Aggery from her personal collection.

That’s Kiki. An eternal traveler who really faces the world as her home. Now, imagine how much easier it would be for all the Kikis around here if countries didn’t have borders? I’d definitely apply to live in such a perfect place.