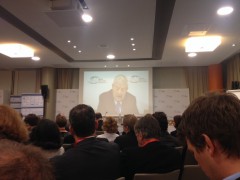 I wanted to learn about the current state of the European continent while spending time on it, and I couldn’t miss a session staring the right-wing’s favorite boogeyman, George Soros.

But only one line from the GES session The Future of Europe acknowledged the real issue.

Europe wants to have a seat at the global power table in the future, and the only way it gets a reservation is as one large collective.

“It will be a very small table in 2050, and Germany will not be at that table alone,” said Caio Koch-Weser, a panelist and Vice Chairman of the UK Deutsche Bank Group.

Caio’s line rung true and yet none of the European or American panelists went back to discuss it. Europe is separating over petty squabbles related to the recent economic crisis, losing sight of the real strength of a continental union. Forget the financial, Europe’s only hope for political influence in the future is to work as a bloc, despite temporary monetary ups and downs.

When I studied in Spain, a particularly influential political professor, Juan Carlos Periera de Castañares, who seemed to be a traditionalist Spaniard, had the blue and gold EU flag hanging in his UCM office. Despite the historical differences (and the future differences), he nearly daily espoused the values and potential of a unified continent, what he hoped would become a “United States of Europe.”

In contrast, the GES session featured Soros reading at length from a prepared text. The Hungarian billionaire set the tone for a long-winded ceremonial dumping of opinions on South vs. North, Germany vs. the rest. There weren’t many concrete solutions proposed, but there was one obvious truth I noticed as an outsider.

Divided, or rather, as is, Europe is a loose collection of geographically close but culturally diverse nations—a pond of minnows in a fish bowl filled with whales like Russia, China, and the United States. The up-and-comers like India and Brazil could soon outrank even European powerhouses in people, total productivity, and perhaps soon, political influence, if only due to their enormous size and continued growth. But together, the EU has the highest GDP of any “nation.”

This evening was filled with chatter about the economics of the recent downturn and the economic disaster in Greece. The larger issue is the arc of time and a future for which Europe must be preparing now if it wants to have any voice in the future global-political landscape.

From a traditionalist perspective, it can be almost painful to watch such disparate nations, already fracturing under the weight of internal ethnic and national divisions, trying to cooperate on such a massive scale. But it’s in Europe’s best interest to further connect as one powerhouse, and it’s in the United States’ best interest to have a partner, a fellow heavy-hitter, and collection of wealthy Western states in the inevitable disagreements that will happen with other emerging and existing powerhouses.

It’s not about Greece. It’s not about Germany. It’s about the EU getting its act together in time to have a more unified and meaningful say in our global future.