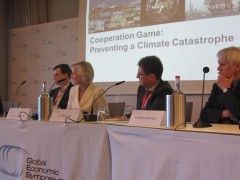 In pursuit of answers to these questions, I listened to academic experts on climate change at the palatial Atlantic Hotel in Kiel, Germany. They have suggested some solutions. But, are the solutions realistic to the underprivileged masses in developing countries like Uganda? Well, that’s a story for another day.

The moderator of the session announced that every participant would play a group game on a computer. But, we had barely started playing this “cooperation game” (developed by professors at Kiel University) when, for some reason, a technological glitch occurred. The main computer controlling the game failed to respond. Everyone in the room was disappointed that they couldn’t play the game to the end. With apologies, the game was abandoned.

A panel discussing how a climate catastrophe can be prevented. Photo by Mubatsi.

The breakdown of the main computer likewise illustrates that the campaign of preventing climate catastrophe can be thwarted by a single entity. During high-level negotiations about climate change, an action or a position of one country can significantly affect the battle. We need to cooperate to reverse the negative effects of climate change and ensure sustainable growth.

The reality of climate change and its negative effects is universal. In the session, we heard that cooperation is the key in addressing the adverse effects of climate change. Cooperation is like a game. In the game, you need teamwork to succeed. If we, as a team, invest in preventing climate catastrophe by passing and implementing laws that protect the environment; regulating resources such as water bodies and forests and fragile ecological resources like wetlands; and committing more money and time to renewable energy, we’ll make strides toward having a climate change-free world.

The benefits of preventing climate change go to the future generation. The famous African proverb that “the Earth is not inherited from our ancestors but from our children” couldn’t be truer. In his keynote address at the opening of the 2013 Global Economic Symposium, Professor Dennis J. Snower, President of the Kiel Institute for the World Economy and Director of the Global Economic Symposium, emphasized the sustainable use of resources to create wealth. He mentioned that human activity has significantly contributed to climate change and the time to act is now. The time is now to emphasize the adoption of low-carbon economic policies that go beyond the green campaigns.

Yvo de Boer, the former executive secretary of the UN Framework on Climate Change and participant in the Kyoto Protocol negotiations, says politics are always getting in the way of properly addressing climate change. “Solving climate change will not happen in one swoop but with consistent global efforts,” he says.

The solutions to climate change lie with ordinary people. It’s the decisions we make now that will fuel or control climate change. Are you with us in preventing a climate catastrophe and achieving sustainable growth, or are you against us? It’s your choice.