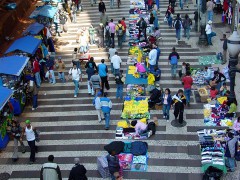 The following article deals with the topic “Favelas – a Global Challenge and Opportunity” which is currently discussed at the Global Economic Symposium in Rio. The author intends to enrich the discussion at the symposium with his personal stories and ideas.

The afternoon panel on “Favelas — A Global Challenge and Opportunity” at the Global Economic Symposium unfortunately shifted in focus as two of the panelists could not make it, which left an academic and housing NGO perspective, moderated by an author familiar with Rio’s favelas.  They tended to harp on the challenges of favelas – security, drug trafficking, land tenure, non-payment of taxes –  while ignoring the other part of the title, their opportunities. When opportunities were discussed, they were framed as those created by state intervention, like infrastructure programs and the UPP police program, rather than the grassroots efforts of residents themselves – from sustainable urban development models to cultural production to innovative social networks to bustling micro-entrepreneurship.

Unfortunately, right off the bat the conversation diverged from the main topic to the BRICS’ emerging classes, especially Brazil’s new middle class, the so-called “C Class” that has been an obsession of late among the “A” and “B” classes who have spilled plenty of ink observing and criticizing their consumption habits.

That said, one interesting point that emerged was the unfairness of comparing Brazil’s new middle class to the American middle class, as is commonly done in the media.  They do not have two cars and a big house, but they do have two kids – their reproductive rates are higher than the developed world.  Moreover, they are in line with the standards of the other 80% of the world.  Despite the elite stratum of Brazilian society’s penchant for comparing itself to Europe or the U.S., the country remains, in effect, “Bel-India,” as it is sometimes nicknamed: a mixture of Belgium and India.  But while this analogy traditionally referred to small pockets of wealth surrounded by a sea of poverty, the equation could be inverted insofar as the poor ranks of Brazil are growing fast – much like in India – while the rich classes are stagnating – much like a crisis-stricken EU (and by extension Belgium).