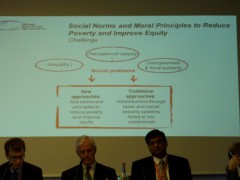 As I have previously written about issues of inequality in Latin America, my expectations were high when I went to the session called “Social Norms and Moral Principles to Reduce Poverty and Improve Equity” at the Global Economic Symposium.  However, I have to say that I came away feeling disappointed and dissatisfied with the overall balance.

Admittedly, the panelists were great and ranged over quite a number of issues. They talked, for example, about  how the best measures against inequality can be found in the Nordic countries, and how inequality has been growing in the United States. They highlighted the peculiarities of inequality in Russia, what China should do to reduce its own inequality, and the measures that have met with varying degrees of success that India and Brazil have put in place to combat inequality.

But – and maybe this is a very personal perception – I found it a little bit cynical to say, for example, that inequality is a step on the road to development. This may well be true, but coming from representatives of countries that have largely built their wealth on exploitation of other peoples’ resources, it should have been accompanied by at least some recognition of the role they have played in the generation of global inequality.

Moreover, while it sounds realistic and certainly far away from the classic proposals of the IMF or the World Bank, to emphasize that there is no single recipe for reducing poverty and inequality, and that each country should identify the measures that fit best with its own reality, I found it a little schematic that most of the conversation was held within the framework of the current economic model without ever questioning its validity or enforceability.

Something that sounded a bit provocative, was said by Charles Simonsen of the FGV Foundation in Brazil when he pointed out that the recent protests in that country have been a good thing, because they have made politicians aware of what people are demanding, and now that they know they can either work to fulfil these demands or forget about re-election when their time comes. This is not without its grain of truth  – only I would add that it’s probably not that politicians never realized what people were demanding; the difference now is that everyone knows that they know which makes it that much more difficult for them to ignore what people are saying. In other words, this is transparency and accountability in its popular expression.

Equally provocative was the remark that it’s not corruption that is the problem in Brazil but bureaucracy. What about all those Brazilian anti-corruption activists who participated in the recent protests and exposed themselves to baton charges, tear gas and brutal police repression to claim their right to transparency and participation in government decision-making? Maybe it’s a good thing to separate out the problems because normally in this part of the world we consider them as being one and the same, But if this is a pretext to apply liberal doctrines for reducing the size of the state, when what is needed here is precisely an increased state presence, then such a statement, to say the very least, is quite biased.

In short then, while economic measures were given a good airing, there was little about social norms and even less about moral principles. In my view these were good intentions poorly implementated. Perhaps the panel should have been multidisciplinary and have proposed some multidisciplinary solutions too.