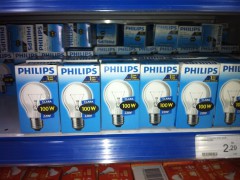 Brazil phased out incandescent light bulbs of more than 100W on June 30, 2012. (All photos by Rasheed Abou-Alsamh)

I STILL remember shopping for compact fluorescent light (CFLs) bulbs in Jeddah, Saudi Arabia, with my father for the new apartment that I was moving into after graduating from university in the US. That was 24 years ago, and already my father had become a convert to the huge energy-saving aspects of CFLs. He was determined to outfit every light fixture in my new home with CFLs to save electricity and have a smaller power bill at the end of each month. I guess you could call my dad an “early-adopter” when it came to new technology that saved money.

The aspect of CFLs that I disliked back then, and even today, is the very white light that they emit. While it is true that they have managed to make CFLs recently that emit a more yellowish light, I still feel that they don’t come close to the warm glow produced by the old incandescent lamp. The problem with incandescent light bulbs is their inefficiency: They produce 95% heat and only 5% light, and they last much less than CFLs do.

The problem that the Brazilian government is facing in getting its population to switch over to CFLs is the price factor. According to a report on Jornal Nacional, 40 percent of all light bulbs sold in the country are still incandescent ones, which is due to the fact that on average a CFL bulb costs nearly four times more than an incandescent bulb. Several Brazilians that were interviewed by the news program admitted that the majority of the bulbs in their homes were still incandescent ones because they felt they couldn’t afford to switch to CFLs.

CFL bulbs on sale at a supermarket in Brasilia.

I use a halogen light bulb in my bedside lamp, which gives off a nice, yellowish light, and is 30 percent more efficient than a regular incandescent light bulb. It’s supposed to last 2,000 hours, or double the life span of an incandescent bulb, but at R$7.49 (US$3.71) a bulb, it is not the cheapest option.

The light bulbs that are the most efficient in terms of energy use and have the best light output are light-emitting diode ones, or LEDs.  I found a Philips LED bulb online that you can screw into any table lamp that costs R$48.50 (US$24) on sale (regular price R$77.35 or around US$38). Even though it is supposed to last 25,000 hours, compared to only a measly 1,000 hours for a comparable incandescent bulb, its high purchase cost means that most LED lighting so far has been mostly used in shops, hotels, restaurants and the homes of the very wealthy. Hopefully, the mass manufacture of them will push their prices down and allow a wider portion of the public to switch to LEDs, which also have the advantage of not heating up.

Brazilians have experience in not wasting electricity, especially after they went through a national power shortage in 2001 and 2002, when due to a lack of rainfall the production of electricity dipped sharply. Since the majority of electricity in Brazil is produced through dams, this was no laughing matter. This pushed the federal government to start a mandatory rationing program, warning residential and commercial users of electricity that they would be fined if their power use went above a certain level, and that rolling blackouts across the country would be necessary to ensure power for everyone. This pushed Brazilians to go around their homes unplugging appliances that were not being used, and turning off of lights that were not being used. In the end, no blackouts were necessary.

“I think it was good training for people to learn how not to waste electricity,” said my mother, who lived through the crisis along with my father in Brasilia.

I still am bothered by the large electric bill we receive every month here in Brasilia, especially with the much smaller bill I used to get in Jeddah, Saudi Arabia, where I ran several air conditioners practically 24 hours a day. The huge difference in bills is due to the fact that the Brazilian federal government heavily taxes electricity and in Saudi the government subsidizes the cost of electricity. There is a movement in Brazil, spearheaded by the Federation of Industries in the State of Sao Paulo (Fiesp), to get taxes cut on electricity and to get power generators to sell their electricity at friendlier rates.

Environmental activists may approve of Brazil having very expensive electricity, arguing that this prevents the waste of power. I beg to disagree, because while I don’t think Brazil should have super-cheap power, having some of the most expensive electricity in the world is a drag on the economy and people’s pocketbooks.