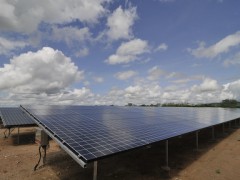 You would think that in a country like Brazil, that has abundant sunshine and a decades-old commitment to renewable energy, solar energy would have been embraced with much vigor many years ago. Unfortunately, that has not been the case due in part to the fact that most of the country’s electricity is already produced through a green method — dams —but also because high import and local taxes have made solar energy not competitive until now.

Until now, solar energy has mainly been used for several decades here as a means of heating water for residences and also to generate power for telecommunication towers in remote areas and speeding cameras on highways.

Thankfully, new regulations released by the Brazilian government concerning solar energy, and the start of the country’s first commercial production of electricity from solar energy this year, means things are slowly changing here.

The Brazilian electricity regulator, Agência Nacional de Energia Eléctrica, or Aneel, issued several resolutions in April 2012 laying down guidelines for the commercial production of solar energy, giving producers of up to 30MW of electricity discounts of up to 80 percent in transmission and distribution fees for projects set up until the end of 2017, and valid for the first ten years of operation. After the first 10 years, the discount would drop to 50 percent.

Residential producers of electricity from solar energy face many of the same questions: Will import and state taxes be cut on equipment needed? Will they be allowed tax deductions on their set-up costs? Will local power companies buy excess electricity produced at attractive rates?

According to an exhaustive study of solar energy in Brazil done this year by the Empresa de Pesquisa Energética (EPE), a research arm of the Ministry of Mines and Energy, the cost of a 5Kw system would be an eye-watering R$38,000 (US$19,000), while a 1.4Kw set-up in the US would cost only US$5,000 (without installation). Here in Brazil I found a kit (without the batteries to store the power) that produces 1.35Kw a day of electricty priced at R$2,299 or US$1,125. Adding the two recommended batteries with 220Ah of capacity each, would add US$880 ($440 a battery) to the package cost, for a grand total of US$1,925.

The solar set-up at Alex Kasper's house which heats water and produces electricity. (Photo by Alex Kasper) Courtesy from the author

The EPE study looks at the American and European approaches to solar energy, noting that both the US and France give homeowners tax rebates for installing solar systems. My nephew Alex Kasper, who lives in the United States, told me that 30 percent of the cost of the solar energy system that he and his father recently installed in their home would be deductible from their income tax. Their set-up has six solar electric cells sandwiched around two solar thermal arrays (to heat water). “We are generating around 15 percent of our daily electricity use,” he told me by email.

The EFE study on solar energy points out that the Brazilian government will have to decide if it will cut import taxes on solar panels, give business and home owners who use solar energy tax rebates, and if Brazilians in general are prepared to pay a premium for electricity produced from the sun. It also says that banks currently only offer low-interest loans to those who want to invest at least R$3 million (US$1.5 million) in a solar energy project, saying that similar loans should be available to private homeowners to install smaller systems.

The study also looked at current power rates across the country and found that generally speaking the costs of electricity produced by solar energy was only competitive if the government applied a 30 percent income tax rebate to those producing it.

According to Jorge Stark, a spokesperson for Aneel, the regulator called for solar energy projects to be submitted in 2011 for evaluation, and that it has since then given the green light to 18 projects that are projected to invest the equivalent of R$410 million (US$205 million) over the next three years, with 25MW in production capacity to be installed in all regions of the country.

Eike Batista, the richest businessman in Brazil, who controls companies involved in mining, oil and transportation, recently built the country’s first commercial-scale solar energy electricity plant in Tauá, Ceara. His company MPX installed 4,680 solar energy panels in an area of 12,000 square meters in 2011, with an initial output of 1MW, enough to power 1,500 residences. The project cost R$10 million (US$5 million), and MPX has approval from Aneel to expand its capacity to 50MW. The company signed an agreement with GE Energy of the US last year to double the output to 2MW by the end of this year, with the addition of 6,900 solar panels.

Given all of the obstacles and competition from cheaper energy sources that it currently faces in Brazil, it will be interesting to see how much the use of solar energy grows here over the next few years. But it is important to keep in mind that solar energy should be one of many strategies in producing renewable energy, along with wind, hydro, and biofuels.

“Solar is not a panacea but simply one tool in our toolbox,” Alex said. “We need diversified generation, i.e. solar, thermal, wind and geothermal. Some days you have sun and other days you have wind or neither, and instead could benefit from geothermal heating and cooling. Implementing various technologies will help a homeowner generate their own power regardless of weather conditions.”