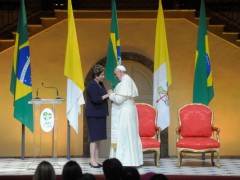 World Youth Day took place in Rio de Janeiro, and Pope Francisco was in Brazil. Although it was his first visit, Catholicism has been interconnected with Brazilian politics, society, and the economy for five hundred years. Here are some facts about Catholicism’s relationship to Brazil, a so-called secular state:

With all these examples in mind, it seems only natural that Pope Francisco would be received with pomp and circumstance by the Brazilian government. The reception included a meeting between the Pope and Dilma Rousseff. The juxtaposition was striking: a woman president in less than a hundred years of Brazilian democracy versus no women priests much less a pope in more than two thousand years of Catholicism.

OK, I’m done with the criticism. Every Western country probably has a past (and present) with the Catholic Church. By now, it should be clear that it will take many years before these states become truly secular. In the meantime, why not take advantage of the influence of religion and make it into something good?

For instance, the Catholic Church has made great contributions in the area of social justice. The Pastorais are good examples. The Pastoral da Terra fights for the rights of farmworkers and lobbies for fair agrarian reform. The Pastoral da Criança, also an arm of the Church, advocates for children all over Brazil, regardless of their religion or background.

In the opening mass of World Youth Day, the archbishop of Rio de Janeiro offered prayers for the 242 young people who died due to a fire in a dance club in Rio Grande do Sul, and he also recalled the victims of the Candelaria and Vigário Geral massacres in which more than 30 innocent children, adolescents, and homeless people were killed by police in Rio de Janeiro.

That’s a good use of public attention: nobody likes injustice, and both the Church and the government should work against it. The Pope and priests influence millions of citizens; why not affect them to do something for the common good?

Moreover, some issues could be addressed by both the government and the Church without compromising the Catholic agenda:

I long for the day that religion and politics are finally separated, and each one works for its own purposes. Meanwhile, I pray that they can work together against common enemies. And, as Pope Francisco said, “I celebrate for all who believe that a new world is possible.” So do we, Pope. So do we.