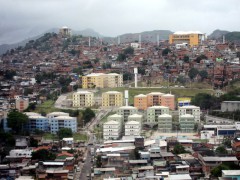 The following article deals with the topic “Favelas – a Global Challenge and Opportunity” which is currently discussed at the Global Economic Symposium in Rio. The author intends to enrich the discussion at the symposium with his personal stories and ideas.

For those interested in design, architecture, city planning, urban sociology, housing policy, real estate economics, and applied social science, the afternoon session at 17:15 BRT, “Favelas — A Global Challenge and Opportunity“, is a must-see.  Given that it is an off the record discussion, a quick run-down now of the panelists and their expertise is in order, as they will be largely anonymous when it comes to the discussion.

Jorge Mario Jáuregui is a distinguished architect and urban designer, winner of the Veronica Rudge Green Prize in urban design from the Harvard University Graduate School of Design for his design solutions to favela infrastructure challenges for the Favela-Bairro Program, a pioneering favela-upgrading effort financed by the Inter-American Development Bank.  Argentine by birth but Rio-based for many years, where he runs the Atelier Metropolitano architecture firm, Jáuregui has written elegant theoretical texts on favelas in a variety of languages.  His firm continues to play a pivotal role in Rio’s upgrading efforts, including the design of the recently opened aerial cable car in the Complexo do Alemão.

Marcelo Neri, formerly of Fundação Getúlio Vargas, a co-organizer of the GES, was recently promoted to President of the Institute for Applied Economic Research (IPEA), a highly respected Brazilian government institution.  Earlier this year, he published UPP2, a study of the police pacification program in Rocinha and Complexo do Alemão, two of Rio’s largest favelas, that provided some of the first academic, applied social science insight on these communities since the police assumed control.

Ignacio Pinto, Regional Director for the Southern Cone & Brazil of TECHO US, represents a formidable, multinational housing NGO, Un Techo Para Mi País (A Roof for My Country) that has promoted low-income housing solutions across Latin America since 1997.  It began in Chile and is now present in 19 countries throughout the Western Hemisphere.  Something akin to Habitat for Humanity with a focus on housing in disaster zones, Techo has built 78,000 emergency housing units with the help of over 400,000 volunteers.

Saskia Sassen, Robert S. Lynd Professor of Sociology at Columbia University, rose to fame on the strength of The Global City, a pathbreaking work of urban sociology in the 1990s that outlined the now everyday concept of a “global city” where commerce, financial services, and infrastructure combine to produce exceptionally wealthy metropolises.  The flip side of this rise to affluence, Sassen astutely noted, was a correlative rise in homelessness, poverty, and other social ills.  In effect, global cities operate on a dualistic economy of the very rich served by the very poor, with nary a middle class to be seen.

Finally, author and photographer Douglas Mayhew will moderate.  He published Inside the Favelas this year.