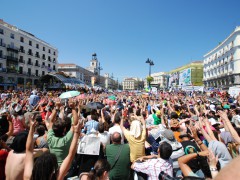 There are many examples of movements around the world that have successfully used social media tools, such as Twitter, Facebook, and YouTube, to spread knowledge of struggles, convoke demonstrations and keep the world and the movement itself informed of what’s going on at all times.

I can recall four movements that have used the available social media tools with some degree of success:

The Green Movement in Iran demonstrated against what they assert was fraud in Iran’s 2009 presidential election. For months they demonstrated in the streets and used tools such as Facebook and YouTube to gather demonstrators and, after the ban on the main mass media outlets, to spread the news about their movement. They didn’t succeed in overthrowing the fraudulently elected government but planted a very important seed.

The Indignados movement in Spain is another good example of a movement that has used social media tools. It was born in 2011, before the parliamentary elections that took place that year. It opposes both of Spain’s main political parties, neither of which is perceived by protesters to be representing the people’s interests. The protesters despise traditional politics and, following the victory of the right-wing People’s Party, are still active against the austerity measures enacted in response to the international crisis.

Also, we must not forget about the Arab Spring that started in Tunisia and then spread throughout the Middle East. In countries ruled by dictators who exercise strong censorship over the media, the Arab Spring has become a model for popular, democratic demonstrations supported by social media tools. Without the internet, it is doubtful whether the movement would have spread after the Tunisian example, even though internet access in Egypt (the next country to join the Spring) is quite minimal. On the other hand, most of the local elites are keen users of social media tools and may have been important actors in the revolutionary process.

Finally, one cannot forget to mention the Occupy movements, especially the one in New York, which also spread through some parts of Latin America and have many similarities to the Indignados movement in Spain.

These are examples of movements that have used social media tools and overflowed borders, gathering thousands and sometimes millions of people from those who are used to protests against newcomers.

In Brazil, on the other hand, we lack such movements despite the relatively widespread penetration of internet connections — especially when compared to the Arab Spring countries. There were a few significant demonstrations, such as the  “Churrascão da Gente Diferenciada,” demonstrations against the construction of the Belo Monte Dam in the Amazonian Rain Forest and, finally, the online petition against the attempts made by the Brazilian parliament to censor the internet, which gathered over 150,000 signatures.

In Latin America we also have movements like the Occupies (Occupy São Paulo and Occupy Rio de Janeiro), which, unfortunately, were not able to gather a significant number of people and haven’t created the desired buzz online. In Chile, where, for the second year, thousands of students have been protesting for education, the internet hasn’t played a significant role in the whole conception of the demonstrations. All over Latin America, Occupy-like movements were born and died without a significant impact on the society or on the way people use the internet.

The fact is that the demonstrations in Latin America have so far failed to properly use the internet — or at least have failed to use it with the success of their brothers in the Arab Countries, Spain and the U.S. Online movements have failed to go beyond the already well-known protestors who are always present at the many demonstrations the social movements have already convoked. In other words, there’s nothing new. Not many people attended the calls to go to the streets, even after some internet buzz.

There’s a total disconnect between online and offline movements and demonstrations.

Of course we cannot blame the social media tools themselves; rather, it is the lack of politicization of the population — especially in Brazil — and also the tremendous fracture between the leftist political parties and organizations that normally organize relevant demonstrations.