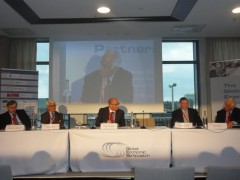 ‘Ethics and Trust in Society and Business’ was one of the most interesting and inspiring panels at the Global Economic Symposium 2011 in Kiel. Although the speakers avoided some difficult aspects, the level of the discourse was pretty philosophical.

Panellists of 'Ethics and Trust in Society and Business' on Global Economic Symposium 2011, Photo by Artur Kacprzak

The beginning was quite pessimistic. One of the panelists pointed out that business has ceased to be ethical. It was corrupted, and companies paid too much attention to profit. Moreover (someone else stated), business CANNOT be ethical, because acting ethically means losing money in the present-day. Even participants spoke with one voice. Asked by the moderator whether business was more trustworthy now or a decade ago, only three hands were raised for the present day (one American and one English, plus a third). So the call in the opening remarks to press ethical reset was maybe shocking but entirely justified.

After that, the panelists started to moderate their statements. One of them introduced simple examples of what might seem like minor ethical practices that we in Europe tend to neglect. We need to listen to the people, and listen honestly. Many politicians may say that they want to listen to the people, but in truth they don’t. Another distinction we need to make is to recognize that people have lost their trust in business, not businessmen. They may believe in a businessman, but they know that businessmen must follow business rules.

We have to rebuild trust. And it is not a case of months, but years. This is a time-consuming process. One panelist pointed out something we often forget: trust is not a marketing campaign, it is a relationship.

Why are ethics and trust such important issues? Ethics creates trust in policy, in business, everywhere. And trust is indispensable in making changes. Simple trust is present on every single level of human communication: this is a rule we need to rediscover. So by chance, the conclusion of the panel became a simple guide for all those who seek leadership: act ethically, gain trust, build leadership and make changes. And be very careful, because if you do not deliver expected changes, you will lose your trust regardless of your other efforts.