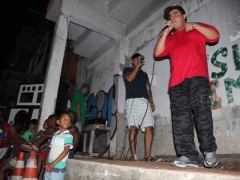 As the Olympic torch has been passed from London to Rio de Janeiro, the spotlight begins on the culture of the city. Londoners got a taste of that during the two-week spectacle, courtesy of Rio Occupy London, a cultural exchange that brought 20 artists, musicians, architects, designers, and other creative Cariocas to conduct a residency in the Olympic city. Among the invited participants was DJ Sany Pitbull, who plays a style of music known as “funk carioca.” It was noteworthy because funk carioca is a genre associated with Rio’s favelas, and consequently has been looked down upon by mainstream middle- and upper-class culture. In the not so distant past, it certainly would not have been given the privilege of representing the city on a global stage.

Funk was born on the city’s working-class north side and took refuge in favelas in the 1990s following official persecution. Its sonic roots are in American funk (hence the name), soul, early hip-hop and techno, and especially a subwoofer-intensive offshoot of rap known as Miami bass. Every weekend, well over one hundred thousand young Cariocas flock to huge parties known as “bailes,” many of which take place in the improvised public spaces of favela communities.

Somewhat paradoxically, however, as Rio’s favela culture is promoted abroad, it is undergoing repression at home. As part of the UPP (Police Pacification Units) program, which has brought a permanent police presence to nearly 20 of Rio’s favelas, including some of its largest and highest profile ones, the baile funk has been a frequent target, with legal and policing efforts to shut them down. The police believe that favela bailes, which are usually free to all comers, are paid for by the narco-trafficking gangs that the police were sent in to dismantle. Thus, shutting down the bailes is part of their effort to shut down the culture of the drug trade.

However, funk fans aren’t going down without a fight. For one, they have organized, forming the Association of Funk Professionals and Friends (APAFunk in Portuguese), which hosts freestyle jam sessions to raise awareness about legal tactics used to hinder baile organizers. This show of activism is a remarkable step for funk, which has largely been considered apolitical – just party music, like its American forbearer. But in ways more intentional than how Miami bass inadvertently became a symbol in U.S. free speech debates, funk is adopting more of a conscious hip-hop stance. If a musical innovation of the South Bronx, New York City in the late 1970s could spark a national political movement, then no reason funk can’t do the same. Indeed, MC Leonardo, founder of APAFunk and born and raised in the favela of Rocinha, is a candidate for city councilperson in this year’s Rio municipal elections.