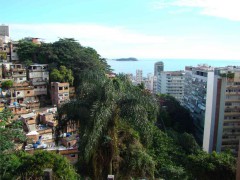 The Cantagalo favela and Ipanema high-rises side by side in Rio de Janeiro.Photo taken by Greg Scruggs, CC BY-NC-ND 3.0

The following article deals with the topic “Favelas – a Global Problem” which will be discussed at the Global Economic Symposium in Rio this October. The author intends to enrich the discussion at the symposium with his personal stories and ideas.

Over 1 billion people live in slums, which accounts for one-third of all urban dwellers worldwide. That simple, stark statistic underlines the vital importance of taking a serious, measured, and respectful look at the communities that lie in the figurative and sometimes literal shadow of the gleaming towers conjured up by urban exultation like economist Edward Glaeser’s book The Triumph of Cities or architect Daniel Liebskind’s claim that “Cities are the greatest creations of humanity.” Cities as economic clusters, cultural engines, and social mixing bowls are indeed a marvel to behold, at least from the perspective of the privileged. As an anonymous UN-Habitat employee eloquently expressed when I was an intern there, “Cities are playgrounds for the rich and battlegrounds for the poor.”

That battleground is often in the territory known pejoratively as “slums,” whose etymology — originally meaning “back room” — indicates the defining feature of what I prefer to call, more neutrally, “informal settlements.” How people live — what kind of house — and specifically where they live — what kind of neighborhood — has a huge impact on their perception by society. In the common understanding, these kinds of communities are dirty, dangerous, and unsafe. But the reality is that by and large they are complex, productive, and creative places whose residents have eked out a remarkable dignity despite utter lack of investment — and often under severe repression from — the state.

From the gecekondu of Turkey to the villas miserias of Argentina to the bidonvilles of North and West Africa to the barrios of Venezuela and Dominican Republic to the hutong of China to the favelas of Brazil, human settlements on the margins of major world cities are a global phenomenon. Their residents are often internal migrants from rural areas, or their descendents, and in the face of a tantalizing cityscape full of economic opportunity but bereft of affordable housing, they squat where they can, building, scrimping, saving, and organizing to improve their lot. It’s a phenomenon that journalist Robert Neuwirth has chronicled up close and personal in the mesmerizing Shadow Cities: A Billion Squatters, A New Urban World.

Inspired by Neuwirth’s book, I made my first foray into the favela of Rocinha, the largest in Rio de Janeiro, Brazil, in 2006. I later returned to live for two months as a volunteer at a local NGO and to conduct research for my undergraduate thesis. Since then, in my two cumulative years of living Rio, I have visited dozens of favelas for cultural, political, social, and technical reasons — to see how they tick, to meet their leaders and residents, or to simply have a good time at a party. With that experience in mind, I will be making regular updates on the favelas of the world.

That said, given that Rio is my home base and the Brazilian context is the one I know best, the richly textured word “favela” deserves an etymological explanation. In 1897, the newly founded Republic of Brazil mustered an army to put down what it perceived as an insurrection. Known as the Canudos War, the army made swift work of a religious community that had drawn thousands of adherents — a much tamer version of mid-19th century China’s Taiping Rebellion. Upon return to Rio, the then capital, the soldiers found that housing promised to them had failed to materialize. In protest, they camped on the hill behind the army headquarters, similar to the 1932 Bonus March on Washington, DC by World War I veterans. In homage to the hills of the Canudos campaign, carpeted by a fern called “favela,” they named their encampment the Morro (Hill) de Favela.

The name stuck, the housing never did arrive, and the idea of squatting on vacant hillsides multiplied with the streams of migrants who came to Rio in the turn-of-the-century upheaval that followed the abolition of slavery (1888) and the declaration of the republic (1889). 123 years later, favelas are a central feature of the urban landscape in Rio, and indeed across the major cities of Brazil. The city, meanwhile, has become a laboratory for innovation — both good and bad — on interventions in the built and social environment of favelas, which I will be reporting on here. Rio, in short, has lessons for Brazil, Latin America, and the world.