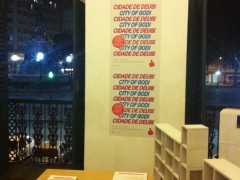 The following article deals with the topic “Favelas – a Global Problem” which will be discussed at the Global Economic Symposium in Rio this October. The author intends to enrich the discussion at the symposium with his personal stories and ideas.

The much heralded UN Conference on Sustainable Development (Rio +20), a follow-up to the Eco 92 summit, came and went with a lot of sound and fury that, sadly, signified largely nothing. While cities came out as the potential 21st century environmental heroes, from a C40 promise to cut 1.3 billion tons of carbon emissions over the next 18 years to a major development bank pledge of $175 billion for sustainable transport, national governments fell on traditional poor/rich country divides that let to a fairly toothless outcome document.

However, the rich tapestry of the conference provided an umbrella for a wide variety of topics beyond diplomatic negotiations. In a recent reflection for Piauí (a kind of Brazilian version of The New Yorker), Marcos de Azumbuja, a Brazilian diplomat involved in the negotiations to bring Eco 92 to Rio, provided a succinct analogy: “If Woodstock, the Conference of Yalta, and the Cannes Film Festival had all taken place at the same time, the combination would have resembled Rio-92.” Indeed, as I blogged elsewhere, the Woodstock element was in full force, especially at the People’s Summit.

The People’s Summit, meanwhile, was the ideal platform for discussions of favelas, very much the local incarnation of the grassroots spirit that the assorted collection of environmental, indigenous, peasant, and women’s issues activists sought to portray.  Of particular note was the debut of Favela as a Sustainable Model, a new documentary produced by the NGO Catalytic Communities, which turns traditional perspectives of favelas on their head.  Rather than viewing them inherently as problems, the documentary highlights the ways that they can serve as solutions to pressing urban dilemmas, if only the government and society were to treat them equitably by investing in them as they do formal neighborhoods. From organic produce to urban agriculture to ecological trails, a panoply of urban sustainability elements can be found in areas of the city more commonly associated with crime, poverty, and the drug trade.

Favela as a Sustainable Model

On Tuesday, June 26, a few days after the conclusion of Rio +20, a similar theme came up as Favela City Exchange, a new exhibit curated by various professors at the architecture and urban design school of ETH Zurich. Of particular note was the presence of Professor Herbert Klupmner, a co-director of influential urban design studio Urban Think Tank. The exhibit showcased two main design projects by ETH students, one seeking to maximize open space near Rio’s Maracanã Stadium and Mangueira favela by creating a Central Park for the underserviced north side of the city. The other envisions City of God, a favela made infamous by the 2002 movie of the same name, as winner of a 2032 award for urban sustainability — a future, the exhibit claims, is not so far from the present day.

The opening of the panel discussion between Professor Rainer Hehl from ETH Zurich (initial speaker), Professor Klumpner, Studio-X Rio director Pedro Rivera, Catalytic Communities director Theresa Williamson, and Rio Municipal Housing Secretariat project manager Antônio Augusto Veríssimo added an interactive element to the exhibit. First, Hehl explains the collaboration with Catalytic Communities to involve actual favela community leaders to come up with sustainable solutions for their own communities. Next, Veríssimo responds (in Portuguese) to questions about the investments coming to Rio and especially its favelas as a result of a series of mega-events, Rio +20 among them, in the next several years.

Finally, as a reminder that favelas as a model of sustainability remains a nitch concept, a group from the People’s Summit traveled to the site of the main Rio +20 conference near the threatened favela of Vila Autódromo in a show of support. The likely subject of a future profile, Vila Autódromo is caught in a legal and political crossfire as a once deserted area has erupted into prime real estate on the doorstep of the Olympics.