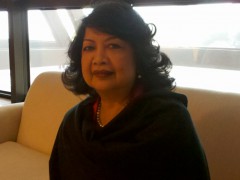 The following article deals with the topic “Implementing Board Diversity,” which is currently being discussed at the Global Economic Symposium in Rio. The author intends to enrich the discussion at the symposium with her personal stories and ideas.

“I was at the panel about New Approaches to Economic Challenges, and there were five men at the table. Not a single woman. I couldn’t help but tweet a picture of them and write: ‘Seems women leaders have nothing to contribute to solving this crisis? Perhaps this picture IS the problem.’”

That’s how this 63-year-old woman acts against gender inequality: criticizing public and private policies, sharing data about women on boards and, of course, through Twitter.

I’m not even pretending I’m impartial here: Irene Natividad became my new idol of all times. I met her for an interview after the Implementing Board Diversity panel at the GES, and we started talking over tea and cookies.

Irene Natividad at GES | Photo taken by the author

Irene was the panel moderator and chose each one of the speakers. She could recite the percentage growth of women on boards, argue the importance of quota policies and speak about the different approaches chosen around the world – all by memory (you can find out more details about her brilliant mind in this 2009 interview).

Despite the first impression of a fragile aspect, Irene just has to start speaking to show that a woman with strong opinions is in the room. Drinking jasmine tea, she told me one of her main principles: Women don’t get to the top naturally, as it was believed in the ’60s. They need policies to enforce equality in companies and governments, and we have to get going right now.

As said on the GlobeWomen website, she “wears many hats.” She is the President of the Global Summit of Women, “an annual international gathering of women leaders from around the world,” and “runs her own public affairs firm, GlobeWomen,” in Washington, D.C.

With her sensibility for “minorities” – her doctoral thesis in American literature was centered on female slave narratives, for example – her academic background, her pursuit of equality, and her battles for women, in my personal opinion, Irene represents a role model for all women around the world.