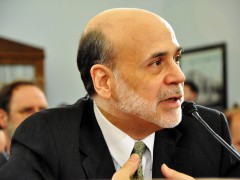 On August 23rd, in an interview with Fox Business Network, Republican U.S. presidential candidate Mitt Romney said if he wins the race for the White House, he will not appoint Ben Bernanke for a new term as chairman of the Federal Reserve. Bernanke’s current term, his second in a row, ends in 2014, months before the end of the period in which the current monetary policy committee announced it would leave interest rates at extraordinarily low levels.

Mr. Romney’s early announcement was somewhat of a surprise: Jerry Webman, chief economist for the huge fund management firm Oppenheimer, said to Bloomberg News he didn’t recall “a time when the chairmanship of the Federal Reserve was a campaign issue,” adding, “having the chairmanship become something that a presidential candidate talks about, like he would a cabinet official, to me suggests the Fed has some vulnerability on its independence.”

Is the Fed’s independence really being threatened? Critics of the current model would say it is not, since the Fed was never truly independent: its actions and their consequences have so much impact on everyday life, they cannot be dissociated from the economic platform of whomever is currently leading the country. In this case, Mr. Romney is implying that he does not agree with the current monetary policy stance. Indeed, he also told Fox he would seek someone to provide “monetary stability that leads to a strong dollar.”

Many economists believe one of the important side effects of central bank hyperactivism is a loss of confidence in the system of market prices coupled with mounting uncertainty: either market prices become distorted by the incorporation of the huge risk of game-changing intervention, or they cease to matter at all, with central banks setting levels according to their policy objectives. In both cases entrepreneurs and risk takers may feel discouraged, even more so in the current situation, where it’s far from clear if the outcome will be positive.

Ironically, Mr. Bernanke was initially appointed by George W. Bush, an uncompromising Republican. Has Mr. Bernanke changed, or have the convictions of the Republican Party? One of Mr. Romney’s top economic advisers and professor at Columbia University, Glenn Hubbard, told Reuters that Bernanke is “a model technocrat” and that he wished politicians would stop questioning Bernanke’s motives. To make matters more complicated, several economists who identify with the Democratic Party, such as Paul Krugman, have been severely criticizing Bernanke and the Federal Reserve for not doing more to stimulate the economy.

The fact is: whatever its causes, nobody is happy with the slow recovery of the American economy. Elections are close, and Bernanke is a convenient scapegoat, either for conducting the Fed with too much or too little independence. And it’s becoming more and more clear that politics is much more important than the proponents of “great moderation” and “end of history” wanted us to believe.