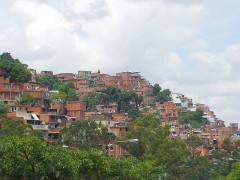 Oil-rich but planning-poor Venezuela has been suffering a severe housing crisis for decades, exacerbated by rural-to-urban migration, a demographic boom, natural disasters, and a skewed use of government resources. Upwards of 50% of Venezuela’s urban population lives in informal settlements, putting it on par with Bolivia as having the highest such percentage in all of Central and South America. But while Bolivia is landlocked and relegated to a modest mineral wealth that has fluctuating values on world markets, petroleum continues to serve as black gold. Unfortunately for the countries that have it, they often get the “natural resource curse,” whereby a supposed blessing of abundant resources leads to dictatorships, wealth inequality, and political repression. The most famous example to have avoided this fate is Norway, which put all of the revenue from oil sales into a national trust fund and only spends the interest.

Of course, the government of Venezuela has spent plenty of its oil revenues on domestic social programs and regional foreign assistance (most notably Cuba). Outside the Caribbean basin, the Venezuelan-owned oil company Citgo has even made some cheeky sweetheart deals in U.S. markets, lowering winter heating bills in the Bronx and Massachusetts.

Now there is a new way of spending Venezuela’s oil money: free houses. Of course, government provision of housing is not a new phenomenon in the developed or developing world. What’s unique is the media-centric method by which President Hugo Chávez is doling out the public housing. He’s doing it on live TV. The definitively made-for-TV lotteries create plenty of tearful moments and generate swelling pro-Chávez support in a close election year. However, the showy presentation is a fairly superficial way of addressing Venezuela’s housing issues (and as the New York Times article in the last link explains, plenty of the free housing isn’t so great after all).

The barríos, the Venezuelan term for informal settlements, ring major cities like the capital of Caracas, where they shamefully do not appear on official maps. This lack of public recognition only contributes to their stigmatization and marginalization. In turn, the Venezuelan Constitution permits occupation of unoccupied land and buildings, such as abandoned real estate projects, which has created remarkable experiments in self-organization across the country, as squatters can benefit from at least partially built buildings and infrastructure rather than starting from scratch. The most remarkable example by far is the 45-story Tower of David, an erstwhile commercial tower that became the tallest squatter occupied building in the world. Residents have self-organized to provide their own security detail, electricity, water, and internal commerce.

Admittedly, the government has made some interventions. In Caracas, the most noticeable would be the Metro Cable, a ski resort-style aerial cable car that turns a 40-minute walk up the stairs into a 5-minute ride through the air. These kinds of improvements in daily life, while very expensive when accomplished through such major infrastructure, nevertheless make a world of different for already struggling poor families whose only housing option is in the informal sector. In the mean time, Venezuela continues to pursue a sites and services first, legalization second strategy by not dealing with the entangled web of land titles. With the country’s tide of informal settlements, however, some kind of consistent national policy should be a priority.