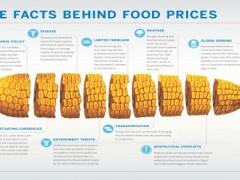 The Facts Behind Food Prices, Published by Jules Bartow on visual.ly

THE worst drought in 56 years in the crop-producing Midwest of the United States this summer has caused corn prices to increase more than 50 percent since mid-June, which has produced a knock-on effect on the prices of beef and poultry, since corn is the main ingredient in most of the feed given to these animals.

Even here in Brazil we have been feeling the effects of the American drought, with Brazilian farmers, who have had a bumper corn crop this year, exporting more corn than usual to the US to make up for the shortages, causing local prices of corn to shoot up. Already the price of chicken in August has risen 3.3 percent here, after corn prices rose 30 percent and those of soya beans went up 100 percent. Brazilian farmers estimate that the feed alone for their chickens represents 60 percent of the costs of raising them.

Unfortunately this decline in US corn production has allowed opponents of renewable energy to use the situation to attack the US government’s mandate that all gasoline have 10 percent ethanol mixed into it. In Brazil, our gasoline used to have 25 percent ethanol mixed into it, which was reduced last year to 20 percent when a temporary shortage of ethanol made its price go up, thus affecting the final price of a liter of gasoline.

But Brazil has an advantage over the US in that its ethanol is made from sugar cane and not corn. Today 33 percent of the sugar cane crop goes towards the manufacture of sugar for export. The rest is divided between sugar produced for domestic consumption and the production of ethanol.

Rows of sugarcane somewhere in Northern Queensland, Australia. Taken by Phil on Wikimedia Commons (via Flickr), CC BY 2.0

Free market enthusiasts and oil industry lobbyists are the most vociferous opponents of the ethanol industry, saying that the production of corn for fuel makes Americans pay $40 billion a year in higher food prices. Another study though, shows that if the US government withdrew the mandatory 10 percent ethanol in gasoline, corn prices would drop only a measly 5 percent! So it seems clear that the bump in corn prices is more due to the drought-caused shortage, than to the fact that 40 percent of corn grown in the US is turned into ethanol.

Even the Brazilian director-general of the United Nations’ Food and Agriculture Organization, Jose Graziano da Silva, called on the US in an opinion article recently to temporarily suspend the mandated 10 percent ethanol in American gasoline. “An immediate, temporary suspension of the mandate would give some respite to the market and allow more of the crop to be channeled towards food and feed uses,” he wrote.

But US President Barak Obama is a firm believer in renewable energy, and it is unlikely that he will suspend the ethanol mandate any time soon, unless a terrible food crisis develops.

In Brazil, sugarcane producers are already asking the state-controlled oil giant Petrobras when it is going to raise the ethanol mix again to 25 percent in gasoline. Last year’s sugar cane crop was affected by too much rain which caused a drop in production, which in turn made ethanol prices go up and led to the cut in mandated ethanol from 25 percent to 20 percent. The Brazilian Minister of Mines and Energy Edison Lobão said that the amount of ethanol would be increased in gasoline if this coming sugar cane crop is good.

Brazil’s ethanol program started in 1975, and according to experts has been able to replace 2.2 billion barrels of oil with ethanol. Every year, the country consumes 120 million barrels less of fossil fuels thanks to ethanol.  The country also produces 3 million flex-fuel cars a year, automobiles that can run either solely on gasoline or ethanol, another boost to the reduction in the levels of carbon dioxide emissions.

Since the level of ethanol mixed into American gasoline is mandated by law to increase every year, President Obama could ask the US Congress to put a temporary freeze on that growth, and wait to see what next year’s corn crop will be like. That way both corn growers and the environment will emerge winners from this disastrous drought.