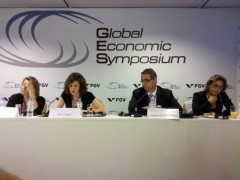 The following article deals with the topic “Designing Intelligent Labor Migration Policies,” which is currently being discussed at the Global Economic Symposium in Rio. The author intends to enrich the discussion at the symposium with her personal stories and ideas.

How to find innovative ways to approach immigration, both for high and low-skilled workers.

That was the main question for the GES panel “Designing Intelligent Labor Migration Policies.”

To understand how the policies can change from country to country, it’s vital to comprehend the different kinds of immigrant workers. Among them, there are high-skilled and low-skilled immigrants.

It is known that there are more than 200 million immigrants in the world, and it’s also known that the majority of them would rather stay in their country or get back to it.

Low-skilled workers leave their countries to find a better life and earn money. They plan to one day get back to their homeland, but many times they can’t. That’s why I support one of the solutions proposed during the panel: provide five or six-year visas for low-skilled workers, so they can work as legal immigrants.

With this solution, the immigrants wouldn’t lose ties to their countries; they would have the simple – but widely ignored – right to come and go any time during those years.

The approach for high-skilled workers should be different, since they are part of a different immigration consequence: the well-known brain drain.  A fact in several developing countries, Brazil also has been suffering from this consequence.

The Brazilian case: how to bring high-skilled immigrants?

It was said that, although the immigration laws in Brazil regarding human rights are well developed, there’s a lack of policies to encourage high-skilled workers to come to the country. There are four times more immigrants than there were ten years ago. However, most of them come from poor regions of Latin American and Africa looking for better chances in life.

Unfortunately, the hour and fifteen minutes was not enough for such an important topic. I noticed a certain disagreement among the panelists relating to the best policies for high-skilled workers – help them achieve their dreams, or avoid the brain drain? In my opinion, it was possible, though, to identify simple ideas and solutions that could change this scenario:

Governments and society should ask themselves:

– Why are people coming to my country?
– Why should they come?
– And why do people leave?

If countries could answer these simple but profound questions, it would get easier to design better policies.

This idea implies that millions of people just want to have the experience of working abroad in high-skilled jobs. But, in order to do so, they need education. So, this approach could encourage companies and countries that need workers to provide “scholarships”: people could study in their own country, have the experience abroad and get back to their homeland as high-skilled workers.

In one way or another, government, companies, NGOs, and society should come together to find the best solution for all. Policies that try to stop or criminalize immigration just don’t work. As was said, in the history of mankind, twenty-seven great walls have been built to stop people from getting in or getting out of countries. Not one has succeeded.