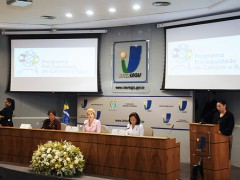 Fortunately, when you start to google solutions to resolve gender inequality and implement board diversity, you find a lot. So much, you can actually get lost.

So, instead of proposing dozens of solutions in this post, I’ll share one interesting one. If you want to see more, I recommend you to look at the proposed solutions from the last Global Economic Symposium.

We all know that women receive less money than men for the same (sometimes more?) work. Another widely shared piece of information is that more and more women are entering the workforce; however, the percentage of them in leadership positions remains relatively low. As an attempt to change that, in 2005, the Brazilian government launched the Equality Program of Gender and Race.

(Before I continue: I’m not part of any party, and I do not think that we have the best policies in the world. Still, I do believe that the government should be the first one to provide an example, and this program seems to do exactly that.)

How does the Equality Program of Gender and Race work? Any institution–public or private–can adhere. It’s based on voluntary participation. After this first step, the company delivers a fifteen-month work plan to implement gender and racial diversity. During that time, it is monitored by the Secretary of Policies for Women. Those that fulfill their own plans receive seals of quality showing that they are a company that promotes equality. There are three types of them:

The main objective of this program is to create a debate about diversity within the companies: how many men/women, Caucasians/non-Caucasians are there working here? Why? What do they do?

And I got to my favorite point: debate. I believe that when people at least talk about and debate such common assumptions, they have to reason through them. They have to construct arguments and deal with their own prejudice. The majority of people agree men and women can do jobs equally well; so, why do we still have inequality? Because people don’t talk about this. They assume it’s OK to see more men as bosses because they’re natural leaders. They assume it’s normal to see more women in assistant positions because all women were born to be mothers . . . . They? Or . . . we?

So far, the Equality Program of Gender and Race has brought this conversation to at least ninety companies, for the most part public ones like the Senate, City Halls, Petrobras, etc. But someone has to start setting the example, right?