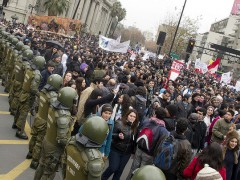 Although recent social protests in Latin America have not reached the level of those in other parts of the world, where they have incited revolutions and overthrown governments, some have had the power to summon large crowds or even ended with a death toll. Some were massive and widespread, such as the protests in Brazil and the student protests in Chile. Others were very localized, such as the protests in Bagua, Peru, which involved almost exclusively members of the indigenous community and ended in nearly fifty deaths. Previous posts have discussed the growth of the economy in the region, where despite the global crisis, things are not all that bad. The statistics on inequality, however, still need a lot of work. How much does this inequality influence the protests in the region? Let’s take a look.

In Brazil, the protests caused by rising fares in public transportation services quickly escalated into widespread protests for various causes and finally converged on opposition to the works for the Olympics and the World Cup. In all of these instances, the protests reflected dissatisfaction with the government. In the specific case of the large expenditures made by regional governments on stadiums and other infrastructure for the Confederations Cup and the World Cup, the contrast with underinvestment in public services for urban areas made plain the government’s unequal treatment, benefiting one sector over another.

Chilean students’ protests demanded education reform from the state, asking for “a free and good-quality public education and a ban on profit in private education.” According to Mario Garcés Durán, director of the Chilean NGO ECO Education and Communications, the system introduced by the Pinochet regime is perverse: “Education is no longer a mechanism for social mobility in Chile and has instead become the opposite: a system for reproducing inequality.”

The case of indigenous protests in Bagua, Peru, is somewhat different. They emerged as the only alternative left to communities to enforce their rights and, above all, to obtain a response. The government had listened to them but then delayed any action. During the course of the protests, then-President Alan Garcia spoke of the Indians as though they were second-class citizens, reflecting the deep inequality in the eyes of the government between “normal” and “indigenous” citizens.

Thus, it becomes clear that there are different forms of inequality throughout the continent. Not only does it exist on an economic level but, as reflected in the above examples, on a legal and educational level, too. And then there are the inequalities secondary to the economic ones, in access to health care, communication, and property, to name a few — or the sense of inequality the ordinary citizen feels when he perceives that institutions favor large companies and transnational enterprises above individuals.

According to a recent UNDP report, it is this almost ubiquitous inequality that propels social protests in the region, showing there is a correlation between countries with the highest levels of inequality and countries with the most social protest. The report also found a relationship between the upsurge in protests and the growth of the Latin American middle class — and to this group’s access to modern media on the Internet.

While some see the increase in protests as a continental trend and relate it to movements from decades ago (and some even see the hand of the United States behind social activism in certain countries in the region), others conclude that the protests should not come as a surprise in the current stage of democracy because during the previous phase of dictatorships and authoritarianism, social conflict was severely repressed and rendered invisible.

The question that lingers is whether Latin American governments and rulers will act according to the democratic principles that brought them to power. Will they respond to the demonstrators’ pleas or resort to measures aimed at curtailing social protest? In any case, the old saying applies: “By their actions you shall know them.”