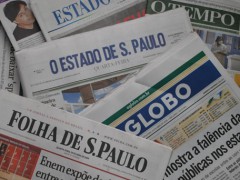 The following article deals with the topic “Optimizing Information Use through the Internet and Social Media” which will be discussed at the Global Economic Symposium in Rio this October. The author intends to enrich the discussion at the symposium with his personal stories and ideas.

Today we all know – or at least most of us know – how to get information, but at the same time, many of us don’t actually know what to do with the overflow of information we get.

We can’t just open the website of a newspaper and think we already know everything about anything. We must dig through a sea of information for what really matters to us. As it is easy to get information, it is also easy to get lost, and, in the end, we end up knowing nothing more than we did before. In other words, what are we looking for: info on the rainy season in Somalia, something about starvation in some parts of Africa or Asia, or just the sports news in Brazil?

In order to search for this information, we need some essential tools to know the path to what we are looking for. We must not only optimize information but also the ways to get to it and, in addition, improve the way we use what we know and learn.

Brazilian newspapers owned by a handful of families

And, of course, we must bear in mind that not all kinds of information is easily available anytime and anywhere. Normally news on social movements is hidden in major websites or scattered throughout minor ones. It is not only a great challenge to find such news but also to increase its impact on society.

At this point, we need to focus on social media tools – Facebook, Twitter, blogs, etc. – and on the power of interested communities. In other words, the best way to get to know what’s going on both in the world at large and with issues in specific localities is to rely on organized online communities.

Once again, the world is more and more dynamic every day, and one cannot feel comfortable just reading a daily newspaper in order to stay informed of what’s happening. Sometimes what is new for a newspaper is actually quite old, not only yesterday’s story but sometimes last week’s story! At the same time, one cannot simply rely on a website (most newspapers and major media outlets have their own websites), which may be heavily biased, controlled by someone or some family with a personal agenda.

In other words, one must go deep into the Web, search different blogs, look for different opinions and points of view online and, sometimes, even go to firsthand sources found online.

Examples include the online coverage of the recent revolutionary processes that spread all over the world as well as localized issues that seem to be less important for the mass media to cover.

Huge social websites, such as Global Voices Online, played a significant role during massive demonstrations all around the Arab World and elsewhere, covering live and explaining to a global audience what was happening or had just happened. This coverage created an atmosphere of discontent and interest among a broad audience, and not just an unacquainted audience, but a mostly militant and well-connected one. And many of the posts and articles written by Global Voices included firsthand or secondhand material, found through Twitter, Facebook and blog posts from people who knew what they were talking about or even saw and were part of history in the making.

Websites and social media tools also play a very important role in calling attention to localized issues. For example, the network from the south portion of the city of São Paulo, Brazil, called Rede Extremo Sul (Extreme South Network), aims to denounce abuses by authorities against the impoverished population of that area and also tries to improve their situation by creating awareness and building partnerships with other organizations.

In other words, it’s not only important to get information but also to know where to get it, in order not only simply to get informed but to act. Information is just a part of the whole role of engagement and action.

One must dig for firsthand, or at least secondhand, information and not just wait for the mass media to give its opinion. And I really mean “opinion.” Of course the media has its side, which is not typically the side of social movements, minorities and people on the fringes of society. Although today we are overwhelmed by information, that doesn’t mean it’s easy to stay informed. Quality of information is the differential.