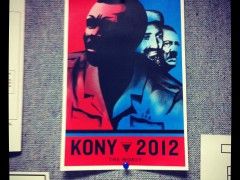 I’d like to recall my first article and maybe talk a little bit more about “knowing how and where to get information” using something I consider emblematic: the Kony video.

I guess most of you have already seen it, along with millions and millions of people all over the world, and it’d be interesting to know how many of you actually supported the whole story. How many of you believed in everything – or most of it – and were convinced to the point of doing something to help?

I have to say that I felt like I was being schemed. I studied international relations, have a master’s degree in communications, and I’m a specialist in international conflicts and terrorism, and despite Africa not being my main area of study (I’m more into Europe, specifically Basque Country and a little bit of the Middle East), I was amazed by how many “mistakes” that simple movie had and kept wondering what they were really trying to do by making all that up . . . .

Of course they were not lying about Kony himself, and their explanation for why they wanted to make him famous was very clever, but the rest . . . . I wrote a few months ago in my personal blog (Portuguese only, sorry guys (and girls)) about it, and the title says much: “What’s wrong with #Kony2012 or the naive ‘goodwill’ of the US.”

I remember talking about the Ugandan Lord’s Resistance Army leader Joseph Kony who used kids as soldiers, mutilated and raped thousands of people in the region and was facing a massive campaign led by the NGO “Invisible Children.”

For most people, it was something amazing. You just had to sign a petition, buy some material, spread the viral video and . . . that’s it. With your support you’d help to mobilize the North American army to search for him in Uganda and bring him to “justice.”

Well, if you knew how to dig deep into social media tools and start to listen, for instance, to what Ugandans were saying about it and what specialists were posting on blogs and on personal and alternative magazines’ websites, you’d realize that it was all a facade for a US-led intervention in a portion of Africa that is increasingly coming to the US’s attention. In other words, you’d be helping the US to set its army in yet another country with some beautiful and humanitarian excuse.

As I said in my blog:

Well, basically the NGO initiative comes from a guy who, appalled and disgusted by the violence perpetrated in Uganda by Joseph Kony and the LRA (Lord’s Resistance Army), a fanatical Christian group and a murderer   decides to do something to end the group, through the arrest of its leader.

I have an early critique that it is perhaps naive to believe that a group with thousands of supporters/members would simply demobilize following the arrest/death (even though the NGOs only defend the arrest and not death of Kony, we know that the second option is more likely to happen) of their leader. The group could weaken, it is true, but it could also be divided into smaller and even more fanatical groups, scattered and with increased mobility.

But those are not even the biggest problems.

We are talking about an organization whose exact source of funding is unknown – some say it’s from right-wing, fanatical, Christian, US-based groups – which has the support of many celebrities who are not known for their human rights-related support (such as Rush Limbaugh, again, a fanatical Christian) and, most important, their methods.

I’m not talking about mobilization methods, which are simply perfect and a case to be further studied, but about the “solution” to catch Kony: to mobilize US troops in Uganda, to train Ugandan troops, and even to advise them to act.

Well, that’s pretty much the US army’s dream: the chance to implant soldiers into a region with an increasing importance to the world’s geopolitics without having to intervene but with full support of the world and from so-called pacifists!

And we are talking about a portion of Africa that is the target of heavy Chinese influence, that is in close proximity to the new state of South Sudan, and where natural and mineral wealth have been discovered and exploited.

Here’s the video made by the NGO Invisible Children, which broke all records on YouTube:

By the way, it’s interesting to notice that most of Invisible Children’s video depicts the mobilization campaign but almost nothing about the victims, about the children of Uganda, and I’m not joking when I recall here the old “white man’s burden” to criticize the whole initiative led by some white European-US-like boys.

Despite everything, I have to repeat myself and say that “[a]ttacking a symptom does not solve the problem, which spreads across Africa,” and, finally, a very important point: no one asked the Ugandans if they approved, liked or wanted such an initiative.

But, after all, what do I want to say with all that? Simple: we must always pay really close attention to what’s behind ANY information we get online. It’s easy to shoot a nice video and make a colorful campaign, but one has to realize that not all colorful and beautiful campaigns are what they seem to be: legitimate.

And as I said in a previous article: “we all know – or at least most of us know – how to get information, but at the same time, many of us don’t actually know what to do with the overflow of information we get.”

We must know not only where and how to get info but also know WHAT to do with it.