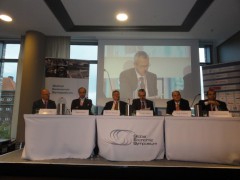 "Insuring the Poor" panel at the Global Economic Symposium. Photo by Artur Kacprzak

Insuring the Poor – one of panels of the second day of Global Economic Symposium 2011 in Kiel was fully devoted to micro-insurances, following micro-credits founded primarily in India with a great success. It is an idea addressed directly to the low-income population. Micro-insurance is a very recent issue. More and more companies are getting focused on this very specific market. This market could be worth about 40 billion dollars and it could amount to some 4 billion people. Its market penetration foremost remains low and is at roughly 2-3 per cent. So it is natural that eyes of investors started to look at this challenge. But do they have a chance to provide stable and secured growth? Will poor people get involved in setting up micro-insurance mechanisms? Is this good for them?

First experiences show it is not an easy deal. Inhabitants of poor regions are not focused on quick and high incomes. They avoid risks; thus they are not interested in spending money on protection schemes. There are economists claiming it is unavoidable. Natural disasters, illnesses and many other issues must concern people regarding their own and their children’s future. The panelists identified the low level of education as a reason for this distrust towards insurances. So it was a quite common agreement that we need to invest in education to make poor people aware that they need insurance and to create a need for insurance services.

To be honest I am not sure that this idea comes form sincere desire to help people in need. Actually, I am pretty sure it doesn’t. I am afraid that we are braking traditional trust selling them our fears rather than our protection. Solutions of the problem about how to persuade people to buy product, that let them have money if something bad occurs go to people who do not care about them as much as about profits. Discussing these questions here we arm companies to conquare the market rather than care about poor. But if it already appeared we need to do something to protect people from the greed of huge companies, who see rather ‘target groups’ than people and their fate. And we need to remember, that what is ‘micro’ for one person is absolutely normal for another.