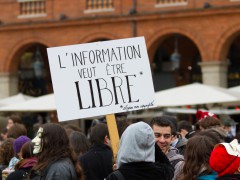 Information wants to be free | Photo taken by Pierre-Selim on Flickr, CC BY 2.0

Those in the private sector (copyright industries, for instance) aren’t the only ones trying to censor the internet and making life a living hell for people who use the internet not only for political militancy but also for fun.

Governments are trying to impose restrictive laws in order to benefit the private sector (working against net neutrality, not enforcing the need for quality internet connections, making it easy for copyright industries to locate and sue users, etc.) and also to avoid responsibility for ruling the internet.

In Brazil we have initiatives such as the so-called AI-5Digital, referring to the Institutional Act Number 5 (AI5) created by the military regime in 1968, which officially instituted censorship as state policy (among other immediate effects). AI-5Digital aims to restrict our freedom online, making day-to-day online activities, such as downloading a CD or a movie, crimes.

Outside Brazil there are many other initiatives. Some are already in use, such as the HADOPI in France, despite the criticism of activists and academics who consider the laws ineffective. Others, such as the SOPA and PIPA laws before the U.S. Congress and Senate, the social movements have managed to block so far.

Worldwide we also have many similar initiatives and restrictive laws controlling and censoring the internet, and I’m not only talking about dictatorships but also so-called democracies.

Governments, together with internet companies and fixed line owners, are trying to break net neutrality, one of the pillars of the internet — and that’s just the first step in the censorship wave. To properly understand, without net neutrality, companies can control what you watch and what you access; in other words, it’s going to be easier and faster to access a huge news website than your blog, and companies will prohibit you from streaming or even using VoIP if you don’t pay more than you would to just access your e-mails.

This is a clear form of censorship, as your access to information will be based on how much you can pay for it. But, unfortunately, it’s not the only type of censorship possible.

Suing internet users for the content they download is also quite common, especially in the U.S. In France the penalty for “illegal” downloads can be a ban from the internet for over a year, and, in some less democratic (not that the U.S. and France are exactly examples of democracy) countries, you can face prison or death.

Between these extremes of censorship, you may also encounter some vigilantism, lack of privacy and the total impossibility of anonymous navigation, thereby putting your safety at risk.

At all times, governments and allied companies are able to know where you are, what are you accessing, and in no time, they can take actions against you, regardless of what you were doing or your real intentions. If you’re an activist, the government can tackle your protest, your movement. If you’re in a non-democratic country, you can face terrible consequences, and, after all, governments and companies can trace you at all times, know your habits and make it easy to watch you, like Big Brother.

And no one can guarantee what they’re going to do with your information.

Here below the other texts of the serie:

The Internet as a Human Right? Part One: Population

Internet as a Human Right? Part Three: Setbacks and the Private Sector