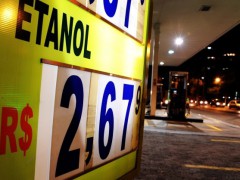 It may be hard for anyone born after 1987 to believe, but Brazil has invested in renewable energy for 37 years now, ever since it started its ethanol fuel program for vehicles in 1975.

That was the year that my family and I moved to Brasilia, Brazil’s capital, from Geneva in Switzerland. Brasilia was still relatively new at 15 years of age, having been inaugurated in 1960, built out of the cerrado of the Planalto Central, or central plains of Brazil. I remember writing papers in high school about the country’s alcohol program that turned sugar cane into a renewable fuel for cars, which was Brazil’s answer to the oil price shocks of the 1970s. At the time, the country imported more than 90 percent of its fuel needs, and the ethanol program was deemed vital by the military government to break dependence on oil imports.

At first, car manufacturers only made cars that ran either fully on alcohol, or fully on gasoline. Then in the 1990s they launched flex cars that could run on both alcohol and gasoline. And even if you drive a gasoline-powered car in Brazil that isn’t flex, you are helping the planet because all gasoline sold in the country has from 20-25% alcohol mixed into it by law.

The problem that has appeared in the past few years is a seeming lessening of the passion that past governments had for the ethanol program. This can be blamed on two factors: Sugar cane growers have turned more of their crops into sugar for export rather than alcohol, because of the rising global price of sugar, and the discovery of large amounts of oil off of the Brazilian shoreline. Called pre-sal in Portuguese, because it is found at very deep depths beneath a layer of salt in the seabed. Already, various Brazilian states, especially those far away from the oil fields, are complaining that they want a cut from the oil profits, something the states of Rio de Janeiro, Espírito Santo and São Paulo have been reluctant to share. The federal government has been adamant that the oil wealth will have to be shared with all Brazilians, and not just those who happen to live near the oilfields.

Brazil has also been a powerhouse of renewable energy because of its massive water resources, such as rivers, that it uses to produce 77% of all of its electricity through dams. That does not stop the country from having some of the most expensive electricity rates in the world, partly due to heavy taxation by the government, and partly due to greedy private operators of power plants and distribution systems. A popular movement to get power rates cut by as much as 20 percent was started a few years ago by the São Paulo Federation of Industries, or Fiesp in its Portuguese acronym. They claim that Brazilian consumers of electricity are being grossly overcharged because of the extra costs added on to their monthly bills by the private producers of power, who claim that they need to pass on the extra costs to the final consumer that they had in building and operating dams. Fiesp claims that this is nonsense, saying that they have already recouped their investment costs years ago, but that consumers have continued to be charged these costs long after they were repaid.

According to Fiesp, the old power generating plants charged R$91 the megawatt hour, on average, while newer plants could produce power at only R$20.69 a megawatt hour. Many of the current power generating and distribution concessions expire in 2015. Fiesp says that 82% of the power transmission line contracts expire in three years from now, as well as 40% of the distribution concessions and those of 112 hydroelectric plants, or 28% of all power generation. They want the government to auction off new concessions to those who can guarantee the cheapest power rates to consumers.

But a new wrinkle in the dreams of lower power rates has arisen: According to the Folha de São Paulo newspaper, large consumers of electricity such as factories and supermarkets have been diversifying their supplies of electricity by buying on the open market, instead of from traditional suppliers. This has left the traditional power suppliers with canceled contracts for future supplies of power, forcing them to pass on the costs to smaller consumers. Already, power distributors in Pernambuco, Bahia, Rio Grande do Norte and Sergipe have hiked their tariffs from 7 to 10 percent.

Wind power being invested in

Brazil has also been investing in wind energy. In 2009 it had its first auction of future contracts for power generated by the wind. This is expected to lead to investments worth $6 billion in the production of wind energy over the next two years. It is estimated that Brazil has the capacity of generating 143 gigawatts from the wind. The Brazilian Association of Wind Power and the government hope to reach 10 gigawatts of wind power capacity by 2020, up from the presently installed capacity of 605 megawatts, with another 450 megawatts under construction.

There are six major wind farms already installed in the country, most of them on the northeast coastline in Ceará and Rio Grande do Norte, with one in the southern state of Rio Grande do Sul.

Local inhabitants in the northeast have complained that the wind farms have cut off their access to the beaches and local wildlife that they used to have access to before the wind turbines were put up.

Brazil is one of the countries in the world that recycles the most. According to figures published by the Folha de Sao Paulo, 98% of all aluminum cans are recycled in the country; 92% of tires; 70% of cardboard; 56% of plastic bottles; 49% of tin cans; 48% of glass, and 28% of paper.

This is good in renewable energy terms because it means less aluminum, cardboard, and plastic bottles need to be produced from scratch, saving natural resources and the energy needed to produce them.

But when it comes to trash recycling, only 2% of Brazilian trash is recycled according to the American blogger Rachel Glickhouse who used to live in Rio de Janeiro. She notes, though, that 48% of households do separate their trash for collection. The problem with that is that many urban areas do not have selective trash removal, so people like me who live in the Lago Sul of Brasilia, are not able to separate my trash, though my mother insists on separating metal cans and plastic bottles. I tell her it makes little sense since it’s all thrown together in the trash truck!