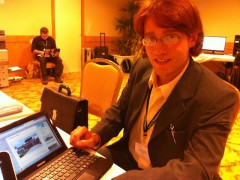 The following article deals with the topic “Reassessing Renewable Energies” which is currently discussed at the Global Economic Symposium in Rio. The author intends to enrich the discussion at the symposium with his personal stories and ideas.

Emanuel Gimenez explaining to me the Argentinean nuclear reactor program, in Rio de Janeiro on Oct. 17, 2012. (Photo by Rasheed Abou-Alsamh)

The ‘Reassessing Renewable Energies’ panel held today at the Global Economic Symposium in Rio de Janeiro did not produce many fireworks, but did emphasize the continued high costs of some forms of renewable energy such as solar, and the impossibility of certain countries that lack rainfall, such as Saudi Arabia, to adopt the planting and use of crops — such as sugarcane — for biofuels. It also highlighted in my mind the growing gap between industrialized countries that are moving away from nuclear energy (Germany and Japan after the Fukushima disaster), and developing ones that are moving towards nuclear, such as the United Arab Emirates and Saudi Arabia.

The panelists included Saudi Prince Turki al-Faisal, former head of Saudi intelligence and founder of the King Faisal Foundation; Nebojsa Nakicenovic, deputy director of the International Institute for Applied Systems Analysis; Roberto Rodrigues, coordinator of agribusiness at the FGV Foundation, and Rolf Salo, CEO of SALO Holding. The moderator was Fiona Harvey, the environment correspondent of The Guardian, and the challenger was Kerstin Schnatz, journalist, anti-nuclear power activist and Bertelsmann Foundation fellow. The session was ‘off-the-record’, so any quotes I use will not be directly attributed to any of the panelists.

Brazil has been at the forefront of the biofuel movement, having started their own ethanol program — as a fuel for cars — under the military dictatorship in 1975 following the oil shock in 1973. The program which transforms sugarcane into ethanol has been immensely successful, with all cars currently produced in Brazil sold with so-called ‘flex’ engines that work on either ethanol or gasoline. The program has perhaps become so successful that most Brazilians take it for granted, and don’t really think about it too much. They should, in my opinion, as the recent discovery of massive reserves of oil off the shores of Brazil, has taken some of the attention away from the ethanol program, which is a shame. I suspect that Brazilian government officials would strenuously deny this, but the fact is that the ‘pre-sal’ oil is the apple of the government’s eye right now!

Nevertheless, Brazil still likes to tout its ethanol program to the rest of the world, even at the risk of having some countries, such as the Congo in Africa, accused by environmental groups of chopping down rainforest to clear land for sugarcane plantation. Former Brazilian President Luis Inacio ‘Lula’ da Silva started an ethanol diplomacy push in 2007 with the United States in which sugarcane growing and ethanol production methods were exported to Central America and the Caribbean, Brazil’s main agricultural research body, Embrapa, has also been active in Africa, exporting Brazilian ethanol expertise to several countries there.

Several participants pointed out that 1.5 billion people still don’t have access to regular sources of electricity, something to keep in mind. This forces poor women in Africa, for example, to have to forage for wood, which they use for cooking and heating purposes, but which also produces much indoor pollution.

Saudi Arabia’s recently announced investment in solar and nuclear technologies were discussed, with some disagreeing that going the nuclear way was a wise decision. But one participant pointed out that Saudi Arabia was looking at nuclear energy as only ONE of many different types of energy, and that it was trying to diversify its energy sources so as not to depend on only one. He said that Saudi Arabia gets 40 percent of its domestic energy needs from non-oil sources, mainly gas, and that Saudi Arabia did not consider nuclear energy to be renewable.

Schnatz pointed out to me in a previous discussion that a big problem of nuclear energy, apart from the usual safety issues, was where to store all of the nuclear waste after it has been used but remains highly radioactive. “It’s like a plane trying to land without any wheels,” she told me, saying that nuclear waste is being constantly moved around as no permanent resting place for it has been found yet.

Interestingly, a participant confirmed that Saudi Arabia has signed several memorandums of understanding with Argentina in the field of nuclear energy. Emanuel Gimenez, a nuclear scientist with the Argentina Nuclear Regulatory Agency, who is attending this conference, later told me that his country was indeed negotiating with the Saudis to sell them a research nuclear reactor. “Argentina has a long history of involvement with nuclear energy. We built our first research reactor in 1959,” Gimenez told me. “We have built 12 nuclear reactors already, eight in Argentina and four abroad, with one each in Egypt, Australia, Peru and Algeria.”

After the tsunami in Japan last year that produced the Fukushima nuclear plant disaster, in which backup power systems needed to cool down the core of the reactor were wiped out, forcing the Japanese to encase the reactors in concrete to prevent a massive escape of radiation, many European countries — as well as Japan itself — have pulled back from their previous commitment to nuclear power. Japan actually took several other reactors off-line this year, but Germany has yet to turn any of theirs off just yet.

But Gimenez told me that the Argentinean company INVAP, which is government-controlled, has developed nuclear reactors that have redundant safety systems that do not depend on external power sources to cool the reactor down. “It’s a natural water circulation system that works with gravity, and does not depend on electric pumps such as the reactor in Fukushima,” he explained.

It’s a shame that nuclear energy was not on the official agenda of GES2012, as this is a topic that should have been discussed formally. Brazil has two functioning nuclear reactors, Angra I and II, and has a third one which is expected to come online next year. With France getting up to 80 percent of its electricity from nuclear energy, and developing countries such as Iran, Saudi Arabia and the UAE developing a nuclear energy industry to produce electricity for civilian purposes, it’s clear that this issue will remain on our agenda for years to come, even if many people do not like to talk about it.