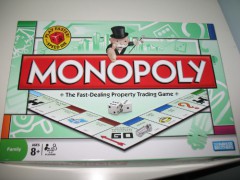 One of the FAQs from the rules of Monopoly (the board game) goes like this:

What if the Bank runs out of money?

Some players think the Bank is bankrupt if it runs out of money. The Bank never goes bankrupt. To continue playing, use slips of paper to keep track of each player’s banking transactions — until the Bank has enough paper money to operate again. The banker may also issue “new” money on slips of ordinary paper.

Monopoly was introduced to the mass market by Parker Brothers in 1935, just one year after a major U.S. dollar devaluation, one of the many attempts to end the Great Depression. Despite the devaluation, the dollar remained pegged to the price of gold. Back then, the Fed couldn’t act as a Monopoly banker, simply issuing new money to address a market shortage.

Sixty-seven years later, in a speech honoring Milton Friedman’s ninetieth birthday, Ben Bernanke, then a member of the Board of Governors of the Federal Reserve System, praised Friedman’s seminal book (co-authored by Anna Schwartz) A Monetary History of the United States. The book’s main conclusion is that the Fed, by keeping money tight, prolonged and deepened the Depression. Bernanke famously concluded his speech by saying:

Let me end my talk by abusing slightly my status as an official representative of the Federal Reserve. I would like to say to Milton and Anna: Regarding the Great Depression. You’re right, we did it. We’re very sorry. But thanks to you, we won’t do it again.

President Richard Nixon, who ended the convertibility of the U.S. dollar to gold | Photo by the White House photo office, public domain

Now, as Fed chairman, Bernanke can literally put the money where his mouth is — and he’s doing so with gusto. Since the “Nixon Shock” of 1971, the U.S. dollar has not been backed by gold, so the Fed can play by the rules of Monopoly and simply issue new money on slips of (not so) ordinary paper or in the form of electronic entries. The dollar’s value is solely determined by the value people attribute to it, based on the perceived strength of the United States economy and the policies Bernanke is responsible for.

Bernanke’s most recent (and arguably boldest) policy move was the announcement, in September, of open-ended purchasing of mortgage-backed securities (as opposed to the previous “quantitative easing programs,” which defined fixed amounts). Apparently, backed by Friedman’s and his own studies, he firmly believes monetary policy has an important, active role to play in dealing with the crisis.

As in Monopoly, an economy based on fiat money cannot be interrupted by a shortage of money, and the central bank never goes bankrupt. However, also as in Monopoly, confidence in the banker is imperative to a functional game. I’ve seen several Monopoly games suddenly interrupted when one of the players notes the banker is not carrying out her job properly — tables were turned and the game had to be restarted, with the banker being replaced. Bernanke has to continue convincing the public that he’s making wise choices and that his politics will not result in inflation and the demise of the dollar. The stakes are infinitely higher than in the prosaic, albeit quite good simulacrum of reality, board game.