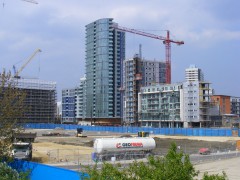 While the sporting world’s attention is squarely fixed on the 2012 Summer Olympic Games in London, the focus of the major media coverage rarely sways from tearjerker stories of athletes overcoming adversity. Without diminishing their accomplishments, the unfortunate truth is that the modern Olympic Games have a long and sordid history of serving as a pretext for urban renewal projects that uproot families, overturn neighborhoods, and generally wreak havoc.

In Planet of Slums, radical urban critic Mike Davis writes, “In preparation for the 1936 Olympics, the Nazis ruthlessly purged homeless people and slum-dwellers from areas of Berlin likely to be seen by international visitors. While subsequent Olympics — including those in Mexico City, Athens, and Barcelona — were accompanied by urban renewal and evictions, the 1988 Seoul games were truly unprecedented in the scale of the official crackdown on poor homeowners, squatters, and tenants: as many as 720,000 people were relocated in Seoul and Incheon, leading a Catholic NGO to claim that South Korea vied with South Africa as ‘the country in which eviction by force is most brutal and inhuman.’ Beijing seems to be following the Seoul precedent in its preparations for the 2008 games.” Robert Neuwirth, author of Shadow Cities: A Billion Squatters, A New Urban World, echoed Davis’s sentiments in an e-mail: “It is definitely true that cities have long used sporting events as excuses to engage in mass evictions. Beijing has pushed out more than 300,000 people from various low-income neighborhoods in the run up to the Olympics next year. South Africa is muscling out squatters and shanty communities in anticipation of the football world cup in 2010.”

In London, the Olympics have focused efforts on the East End, especially the Hackney, Newham, and Tower Hamlets boroughs. Long the grittier part of the city, the East End suffered bomb blasts during World War II and a wave of deindustrialization, including the shuttering of its docklands, that made it a struggling but immigrant-friendly swath of the British capital. The installation of a variety of Olympic facilities has given the area a major face lift, but at what cost? For starters, renters of legal housing faced shady tactics to evict them before the games in order to reap Olympic rates for visitors and tourists. Landlords believed they could fetch in a week what they charge in a month (or more), and thus felt no qualms in hiking rents or demanding that renters leave during the games.

More sinister and concerning is the overarching effect of the games — and London’s surging popularity as a safe destination for investments — on the city’s affordability. The borough of Newham is plum out of spots on its public housing waiting list and is contemplating sending poor citizens elsewhere. Housing NGO Shelter has produced an affordability map that shows the dwindling number of affordable districts as a a result of austerity measure driven changes to local housing allowances. Finally, in a kind of favela-ization of one of the developed world’s financial capitals, landlords are illegally building sheds in East End gardens as housing units, a tactic reminiscent of South African townships.