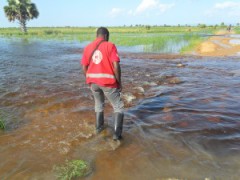 When the UN Secretary General Ban Ki-Moon was giving remarks at the UN Climate Change Conference (COP18) in Qatar last year, one of his statements really stood out to me. Ki-Moon said no one is immune to climate change, rich or poor. In Uganda, like the rest of the world, there are already signs of climate change as seen in the severity of climate and weather events such as mudslides, prolonged droughts, and floods. Uganda must prepare for rising temperatures and more extreme weather to come, both of which are likely to have significant implications for water resources, food security, natural resource management, human health, livelihoods, settlements, and infrastructure.

Recent destructive floods and mudslides in Uganda testify to the looming climate catastrophe. In May, at least four streams in western Uganda burst their banks, displacing thousands. Notable among the property destroyed was a public hospital that serves over 500,000 Ugandans. Elders in the area said it was the worst flooding since 1976. Conservationists blamed uncontrolled farming on hilltops and the clearing of trees from river banks for exacerbating the flooding. Local leaders in the affected areas say the rebuilding process will cost more than UGX50 billion ($20 million).

There is also concern over the receding glaciers in the Rwenzori Mountains due to the impact of climate change. Since the beginning of the last century, the Rwenzori have lost more than half of their 43 named glaciers, the total area of which shrank from 7.5 square kilometers to about 1.5 square kilometers. According to a survey conducted by Oxfam, warming temperatures on the mountains are threatening coffee farming, the major source of income of farmers in Rwenzori for generations. The peasant farmers on the slopes of the mountains are worried about the excessive heat due to the changing climate. “The springs are drying up,” the farmers say, “the coffee has started behaving differently; it flowers even as it fruits. We have lost 20% of our income.”

One of the few surviving rivers in Karamoja, northeastern Uganda. Photo by author.

In addition, rapid population growth and the expansion of farming and pastoralism coupled with a drier, warmer climate could dramatically increase the number of at-risk people in Uganda during the next several decades. Diminishing rainfall in parts of Uganda already threaten the country’s food production prospects.

Several studies highlight Uganda’s vulnerability to climate change. For example, a study by the UK Department for International Development indicates that human-induced climate change is likely to increase average temperatures in Uganda by up to 1.5 degrees Celsius in the next 20 years and by up to 4.3 degrees Celsius by 2080. These changes will have adverse implications for agriculture, food security, and soil and water resources. Not to mention the negative impact floods, drought, mudslides, and the like have on sustainable growth.

The coming crisis calls for action. Not only must efforts to reverse the human-induced climate disaster be undertaken, but the resilience of communities to withstand its inevitable effects must be bolstered. Most of all, Ugandan people need information about how to respond to the destruction to come.