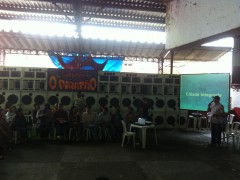 A public forum about police pacification and social services in the Cantagalo favela. Photo by Greg Scruggs, CC BY-NC-ND 3.0.

Favelas have long proved a source of interest for social scientists, especially from abroad. In the 1960s, American scholars Anthony Leeds and Janice Perlman conducted path-breaking, eye-opening studies in Rio’s favelas at a time when Brazilian society preferred to ignore their very existence.  Leeds took an anthropologist’s approach to the 300+ favelas he surveyed, drawing on his experience in rural Brazil, the source of most of the migrants who led to favela population growth during the post-war demographic rush to Brazil’s emerging metropolises. Perlman conducted extensive field work in three favelas by surveying hundreds of residents to gather life histories that she compiled into her seminal work, The Myth of Marginality. Perlman’s 2010 follow-up, Favela: Four Decades of Living on the Edge, turned her 1960s research into a longitudinal study, where she tracked down the children and grandchildren of her original interviewees to see how favela residents’ life prospects change over generations.

While the old guard of favela researchers has the benefit of a career of hindsight, contemporary favela research is booming in Rio especially, as the police pacification program (UPP) has increased accessibility for researchers and journalists.  What follows is an annotated round-up of recent favela research in English for those looking to dive deeper into the data and analysis of life in Rio’s squatter communities.