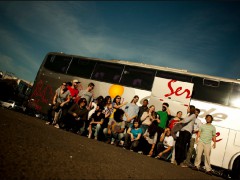 The following article deals with the topic “Tackling Inequality of Opportunities,” which will be discussed at the Global Economic Symposium in Rio this October. The author intends to enrich the discussion at the symposium with her personal stories and ideas.

The newspaper headlines were all about Rio de Janeiro. Everybody talked of nothing else but its vibrant atmosphere. They tried but couldn’t really describe the real optimism in the air. But what I found there was much more than that. From the youngest person to the oldest, we all wanted to get involved, know more about the environment and learn about how to protect it.

Young people on their way to the People's Summit at Rio+20 | Photo taken by Fora do Eixo on Flickr, CC BY-SA 2.0

As usually happens in my life, I had an amazing last-minute opportunity to cover the event Cúpula dos Povos. One week from the start of Rio+20, I had no doubt about what I had to do. I stuffed some clothes into a backpack and boarded a bus from São Paulo to Rio, the Marvelous City.

From the beginning, it became clear to me that the city had been divided into two “poles,” and one of them you were only allowed to go to with authorization from the Federal Government.

The headquarters of events was at the Riocentro. That was where the VIPs were. To make sure I could get information about what was happening there, I called a friend who had just become a diplomat. He was there the whole time, following the debates on the final official document.

Meeting with the Ashaninka indigenous people | Photo taken by Fora do Eixo on Flickr. CC BY-SA 2.0)

I spent most of my time at the other end, at the Cúpula dos Povos. Half a dozen of the most prominent representatives of each tribe polished their speeches, preparing to defend ideas that they had spent their lifetimes building up. If anyone could have imagined a place where all people could get together in a completely democratic atmosphere, they couldn’t have done it better. On an earth-beaten square, an exclusively democratic space, Aterro do Flamengo, in Rio de Janeiro, Brazil, fulfilled its role:

At this place, there was no room for violence or impatience. At this place, each person spoke in his/her own language, and everyone understood each other. Whenever a “gringo” from a non-Latin country needed a translation, it was provided in a so-called “consecutive manner” (first, one person spoke; after he/she had finished, then the translation was done); it was never done simultaneously. Once again, there, you could always find a unique demonstration of cooperation and collaboration — the trademark of this part of the whole event.

These people, who live and depend directly on their interaction with nature, know quite well the limitations of their own bodies as they face the forces of nature in everyday life. At the last rays of the sun, they praised “Mother Nature” and thanked her, each tribe with its own traditional rituals, songs and dances, for their lives and for the event that gave them the opportunity to speak their own minds and pieces. After that, they retired to their tents and got ready for the next day, which would be filled with a lot of hard work. Accepting these limitations as humans, and by that I mean the limits of their bodies and the need to rest their minds, they also respected the limits of their own capability to create, produce, and communicate with others. Wise, they knew and understood that, beyond those limits, nothing worthwhile could be developed, only conflict and dissent.

Meanwhile, my friend followed the performances of the “important people.” They had air conditioned rooms with fabulous bathrooms at their disposal; drove in big cars up to their luxurious hotel suites, which faced our most beautiful scenery; and had security agents in charge of their solitary sleep. They deserved all that, didn’t they? After all, they were the ones responsible for elaborating and writing our final document, namely “THE EARTH WE WANT.” My friend’s reports on the negotiations were completely different from what I had experienced in the Cúpula dos Povos. Those meetings seemed to me more like fights of savage animals, where participants lacked the ability to listen to others, who only wanted to speak their pieces and make their opinions heard, and everyone got so very tired from debating until the late hours of the night — and getting nowhere! To me, they seemed like men and women who had become very distant from nature, who had forgotten their humanity and, who, like gods, were only interested in playing games of creation and destruction, having completely neglected their limits as mere mortals.

The conclusion, then, was not so simple, but it was right in front of us. It didn’t matter where you came from or the color of your skin, the  apartheid — or the likelihood of having influence or getting your opinion heard — would depend on and be determined by how much power you held. I guess it makes sense when you first think about it, but giving it a second thought, when we are talking about global solutions for the environment, every man and every woman is important.

We still don’t know when, how, or from whom or where good ideas will come. Certainly it’s not college degrees that are going to guarantee the best ideas. Making sure people from tribes go to universities, graduate and ultimately become diplomats so they can discuss these issues seems like a joke to me. Their lives then would become as distant from nature as ours. And thinking about that, I reflected on the image below, taken from Revista Veja, published on 20 June 2012, which illustrates this idea very well. They can communicate, get involved and understand themselves as citizens without giving up their own traditions. Even if it could work, the reality is that we wouldn’t give ourselves the luxury to afford this time.

Considering the final document was being elaborated exclusively by the same people who have being trying to solve our issues for a long time, I started asking myself, is there real interest in solving them? Is there any interest in hearing the minorities of the greenhearts of Brazil? They are the only ones who can tell us about the consequences of development in their regions.

Two months later, already far away from the optimistic atmosphere of Rio+20, it is natural that the coastal population (the majority of Brazilians) couldn’t care less about what is happening in the Amazon, with Usina Belo Monte or our rivers. That is only too natural because it is easy to get preoccupied by everyday life. But for the size of the problem we are facing, representative democracy is not good enough, nor is meritocracy.

Nothing we have done until now will be. We always need to keep our priorities in mind: what is most important? To survive. For that we will use every resource — technological, human and creative — and we will have to cooperate. Maybe this way we will find solutions just in time, if we are fortunate enough.