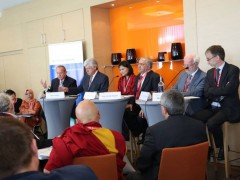 Should it be of interest to people in the third world when multinational companies redefine their objectives and change their strategies? At first glance the answer is no, but if you think about it, you realize that yes, it should be. Of very great and pressing concern. After all, in a pre-globalized world, the decisions taken by first world countries had major repercussions for the rest of the planet. And now the decisions taken by large corporations in our globalized world have broadly similar consequences.

The thing is that third world countries are not attractive to transnational corporations as emerging markets but rather as a ready source of cheap labor and sometimes because of the fiscal benefits they offer in attempts to lure the big players to their shores. Moreover, on the whole, environmental legislation in these countries is less rigorous and demanding while governments in this part of the world tend to be more “corruptible”.

So bearing this in mind, the importance of a session on “Generating winning strategies for sustainable societies” that took place today at the Global Economic Symposium in Kiel becomes much more obvious.

I just want to highlight a few things among the many discussed. For example, they spoke about the cost of sustainability for companies, in the original meaning of the term which refered to the role sustainability plays in terms of  company operations. Sustainability in terms of the company’s brand is a more recent concept. Once again, thinking from the basic premise of cost-benefit is the easy way, but in the wake of the series of PR crises that various companies have weathered, consumer impacts on the name or brand of the company can also be seen in terms of loss or gain.

They also spoke about innovation at the corporate level. We have concepts like outsourcing, for example, which have been on the agenda of companies and even governments for the last 20 years. This, however, is not something that is popular among the working classes in developed countries who are guarded and suspicious as they associate innovation with the loss of jobs. At least for them, of course, what happens is that the jobs go to other side, generally to third world countries.

The question that must be asked is how can we talk about sustainability on a global level when the pressure of large populations in poor countries is so strong that neither governments nor the people care too much about cutting down an entire forest if this allows them to feed their families.

Finally I want to highlight one of the panel’s last thoughts which was that we must put people at the center of development. This links up to what other speakers have been saying in different sessions about seeking wellbeing. True enough, only wellbeing is not purely economic. We must not forget its other ingredients, one of which must be values.

And from my third world point of view I can only say that, okay, it’s great that academics and everyone else are talking about these things, but what are the companies – transnational or not – really thinking? Will they adapt to these proposals? Will they stop seeking profit as their sole objective? And even if they do try to stop doing this, wouldn’t they find themselves suddenly threatened by smaller and less ethical companies that would see this turnabout as an opportunity for profit too good to be missed?

To find a solution we definitely need not only the participation of interested parties from just one part of the world, but from everyone. After all, now more than ever the economy is truly global, and unless a nuclear war sends us back to the caves, there’s no turning back.