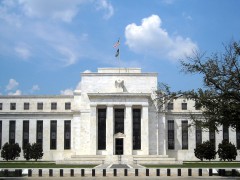 The Eccles Building at Washington, DC, headquarters of the Federal Reserve. Photo taken by AgnosticPreachersKid on Wikimedia Commons, CC BY-SA 3.0

“Nothing is as powerful as an idea whose time has come.”

It began as a little-known idea circulating among some relatively obscure economists. Nine months ago, it gained support from the heavyweight Goldman Sachs. After a speech by Ben Bernanke, legendary fund manager Bill Gross (from PIMCO) said he believed the Federal Reserve was becoming convinced of it, and the portal Business Insider called it “the hottest idea in monetary policy.” A few months after that, it was covered in an extensive article in The Economist.

We’re talking about setting formal targets for the nominal GDP (NGDP). The core idea is relatively simple: instead of targeting a given inflation level and using interest rates to achieve it, central banks should target a given level of NGDP, or a fixed growth rate for this variable. Given that NGDP growth can be roughly expressed as the real GDP growth (the measure we are used to seeing in the press) plus an inflation rate, it would be possible to reach the target with several combinations of growth and inflation. In times of high real growth, an interest rate adjustment would be made in order to reach a lower inflation rate. When real growth falls below its potential, the difference would be compensated for with an inflationary monetary stimulus — cutting interest rates or, after reaching the zero bound, simply printing money and buying assets (quantitative easing).

Since NGDP is the product of a somewhat complex statistical estimation, which is hard to replicate with high frequency, central banks would need some indicator to know whether their actions were conducting NGDP to its target at a desirable pace. This is where market expectations come into play — ideally extracted from a to-be-implemented market for NGDP futures (less ideally from market polls, the same way several central banks gauge inflation expectations).

The main current proponent of the idea is Professor Scott Sumner, a University of Chicago PhD now teaching at Bentley University. An authentic product of his times, Mr. Sumner attracted the media and academic spotlights with his blog where he tirelessly defends the implementation of NGDP targeting in long posts and frequent discussions with several leading economists (Paul Krugman and Brad DeLong among them). The school of thought he represents, the first to emerge from the blogosphere, gained an elegant name: market monetarism (check here for the manifesto by the Danish economist Lars Christensen from Danske Bank).

In my view, market monetarism is an attempt to revive Chicago’s traditional belief in market liberalism in a period where assumptions such as rational expectations and efficient markets have been severely questioned. I’d like to add the following points to the discussion:

– Believing in NGDP targeting depends on several questionable premises. One of them is, to quote Lars Christensen, that recessions are monetary phenomena, i.e., they are mainly caused by overly tight monetary policy. NGDP targeting looks like a way to follow an old prescription from Milton Friedman (the “k-percent rule“): let the monetary base grow at a reasonable, constant rate, and the economy will take care of itself.

– It seems necessary to assume a “natural” rate of growth for real GDP, trusting the economy will move back to it with the help of monetary stimulus. That’s a bold premise, especially in a world of marginally diminished productivity and innovation gains. In several countries, the growth rates achieved in the years before the 2008 crisis were probably somewhat artificial, boosted by unsustainable credit bubbles. If a too-optimistic (thus wrong) premise of a real GDP growth trend is used, it would result in the same lower (structural) growth and thus more inflation — one can read “stagflation” here.

The subject is amazingly broad and complex, and I have probably oversimplified some points — this post intends to be just an introduction to a hot topic. NGDP targeting may be the last shot in the great worldwide monetary experiment, the ultimate bet at trying to prove the importance of central banks, the viability of an economic liberal model, and the relevance of an important part of what has been produced in macroeconomics over the past few decades. I’m mostly skeptical about its results: I believe developed economies have deep structural problems, many of which are beyond the reach of monetary policy (I will discuss that in the near future). In addition, NGDP targeting may open a Pandora’s box of moral hazard and unintended consequences given the complexity of the target variable and the amount of central bank intervention already in the system. Yet, it’s an idea that is at the same time bold and perfectly inserted into relatively comfortable territory to mainstream economics, thus its relevance and potential strength.

For further information, I strongly recommend watching Professor Sumner in the video below or reading this introductory paper. Professor Stephen Williamson, from Washington University in St. Louis, recently put down this nice set of doubts about NGDP targeting, replied to here by Sumner.