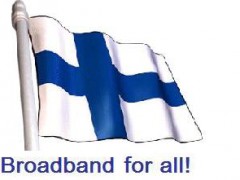 The northern European country of Finland was the first to declare the internet a basic legal right, in 2010. It’s a legal right for every Finn to have at least 1MB for free. In 2011, the UN, through a report, declared the internet a human right: “Given that the Internet has become an indispensable tool for realizing a range of human rights, combating inequality, and accelerating development and human progress, ensuring universal access to the Internet should be a priority for all states.”

But yet most of the world’s population still has no or only poor access to the internet and to the many social media tools available. And such things are happening not only in the so-called “third world” or developing countries but also in the developed and richest countries in Europe and even in the USA.

The lack of good free Wi-Fi connections on the streets and in public spaces, the lack of a strong and definitive declaration of net neutrality and, in many cases, the poor or almost nonexistent quality of internet connections (Wi-Fi, 3G, broadband, etc.) in many countries — along with traffic-shaping policies, broadband limitations, traffic limits, etc. — are visible and dangerous problems for the self-development of a country’s population as well as the country as a whole.

Nowadays, one can’t imagine getting offline for a long period of time. It’s simply and virtually impossible to keep up with the news, to stay in touch with family and friends and, for a few, to feel like part of the society/community.

The internet has become more than simply a communication tool. It is also the easiest way to create bonds, linkages, to be a full and participating member of the society. So, it makes sense that it has become a human right.

But, for more countries to declare the same and for the UN declaration make any sense or become a reality, countries worldwide must start making real state-led policies towards the spread of internet connections and improvements to their quality.

The decisions of many countries to rely on private companies to control not only the infrastructure but also to sell internet connections without any commitment to quality may jeopardize the countries’ futures and, therefore, make it impossible for their populations to have full access to all media tools available online.

We must face the internet not only as a communication tool but also as a way of expressing ourselves, as a tool for promoting free speech and relationships that we cannot live without anymore.