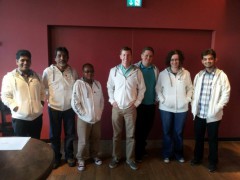 This post was produced for the Global Economic Symposium 2013. Read more at http://blog.global-economic-symposium.org.

“Let me be surrounded by luxury, I can do without the necessities.”

An audience member brought up that quote from author Oscar Wilde in response to the tone of the closing plenary of the Global Economic Symposium in Kiel, Germany. Indeed, the entire conference contained moments of rich guys in suits espousing their paradoxical visions for economic systems that continually grow and yet preserve limited resources.

Eventually the panelists found agreement that there exists an unsustainable cultural preference for money over all other aspects of life that lead to happiness.

The Buddhist monk wasn’t the only one espousing this opinion.

Victor Chu, Chairman of the First Eastern Investment Group in Hong Kong, closed out the 2013 Global Economic Symposium with his thoughts on the progression of business culture.

“When I was growing up, the most honored companies were the ones that created the most returns for investors,” Chu said.

He said “high return for investors” was the buzz phrase decades ago, and it remains by and far the goal of his Hong Kong-based investment company.

“Now, when I ask my daughter what she thinks are good companies, she talks about a social element, companies that do good in the community like Nestle and Unilever; they are making good things, food, for people, and they are doing things in the community,” Chu pointed out.

The banker was pointing out an often forgotten axiom: the future is already here. It’s just younger than you.

Chu implied his generation needs to do more getting out of the way. He was one of the few speakers who focused on the tangible future, youth, and aggressively advocated opening the table to the sustainable opinions already being cultivated in younger hearts and minds.

These aren’t “sustainable” in the hippy or green sense of the word but sustainable in that they are human-centered, trust-building, long-term cultural changes that can benefit everyone engaged in our economic system. Lip service about businesses and institutions regaining trust will turn into noticeable progress over time as Millennial opinions are incorporated into the way of doing business and as future generations are allowed to hone the changes further.

The Millennial generation, also known as Gen Y, already feels this way. The markets will naturally incorporate some of their ideas for the pure sake of appealing to their enormous Gen Y market. But incorporating their ideas about workplace flexibility and doing good in the workplace can happen without forgoing the years of wisdom earned from current leaders. Millennial ideas have their own place in the market without being forced in, but they can certainly be incorporated by the current leadership.

“I have to incorporate my daughter’s viewpoint into everything, or when she inherits it, she’ll get rid of it all,” Chu said to laughter from the closing crowd.