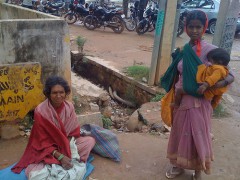 Should we stop sending them development aid just because their country is no longer a low-income country? Sean Ellis, Flickr, CC BY 2.0.

This change raises an important question: where should international development aid from donors like the World Bank, UN Development Programme, and the European Union be sent? Should it go to countries that have significant development and obviously have the means to lift their citizens from poverty? Of the poor living in MICs, almost half are in China and India. Yet, India’s Space Research Organization has so far launched more than sixty-five satellites, and it plans a Mars mission this year. China has a poverty rate similar to that of India; nevertheless, at the end of 2012, its foreign exchange reserves amounted to US$3.3 trillion.

The expenditures and policies of the MICs pose lots of questions about the ethics of aiding countries that have the means to provide basic welfare to their citizens. In 2012, the British Department for International Development decided to finish its aid mission in India in 2015 based on its belief that the country is capable on eradicating poverty without outside financial assistance. However, is it ethical to stop the aid given the amount and scale of poverty in India? The Australian moral philosopher Peter Singer argues that every individual has a moral obligation to save
lives no matter how distant. This view may not be very popular in Britain, a country with one of the biggest austerity measures and rising poverty and inequality. Perhaps high-income countries should provide assistance in the form of expertise about how economic growth can be translated into human development? Leaving the poor of MICs as they are is a waste of the resources and focus invested in them during the last decades.

Aid should be focused on poor people no matter where they live. The World Bank classifies a low-income country as one that has a GDP per capita of US$995 or less. This threshold creates the division between countries that might be considered to be suitable aid recipients (the low-income countries) or not (the MICs). Reliance on this classification does not take into account the majority of the world’s poor, those living in MICs. Is a poor Nicaraguan different from a poor Brazilian? Do Somali poor look different than those in Nigeria? Poor people live everywhere, even in rich countries. Their fate should not be decided by statisticians or policy makers who care only about the numbers. Poverty is a tragedy in a person’s life, and every country and every person who can provide help is ethically obligated to do so.