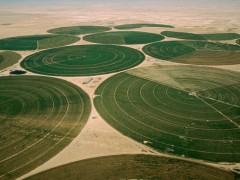 Agriculture issues can often appear quaint and traditional today, when for the first time a majority of people world-wide living in cities and our lives are increasingly defined by ever-evolving information and communication technologies.

Yet agriculture is actually at the heart of many of today’s global problems, whether feeding a still-growing population, preventing regional famines, the development of new sources of energy (biofuels), deforestation, obesity and preserving rural life. Rising food prices have even been cited among one of the reasons for the unrest of the Arab Spring.

Agriculture today represents the ultimate frontier of our “taming of the Earth”: It symbolizes more than anything else our ambition of making life itself conform to our will. Farming world-wide is being transformed as it is “rationalized” by technology and business. Small farmers make way for agribusiness, crops are grown for biofuels, livestock receive hormones and vaccines, genetically-modified organisms are grown, and increasingly massive quantities of pesticides and fertilizers used, etc.

One consequence is the fear of a sort of “new enclosure movement”: The idea that local farmers are being bought out and displaced by international agribusiness, which with their size and wealth may be better equipped to influence local government and twist laws to their advantage.  This was the subject of the GES’s “The Race for Agricultural Land Session”.

Today “enclosure” has been intensely controversial in many places across the world (indeed, the impact of the original Enclosure Movement in the 19th Century United Kingdom remains hotly debated to this day). An attempt by Daewoo Logistics to buy 1.3 million hectares of land in Madagascar for corn and palm oil fell through in 2009, the use of sprayed glyphosate-based pesticides in Argentina for export-oriented GM soy cultivation has been linked to rising rates of childhood cancer, and farmers in Honduras were reportedly forced off their land and killed in plantations getting EU carbon credits.

Where do facts come from?

Then-president of Madagascar Marc Ravalomanana blocked a deal to buy 1.3 million hectares of land in his country.

The challenge of any panel discussion on this topic inevitably lies in the lack of direct experience of its participants. 100 years ago still, even in the wealthy countries a majority of people had some experience, or had spent their whole lives, living in rural areas and working on farms. I suspect very few people attending had any direct experience of farming, though one panelist excused himself because as farmer, “I speak English like Tarzan used to.”

Even with agricultural experience, we are rarely of equipped to directly investigate the state of affairs of the African or Latin American countryside and verify allegations made. One participant defended his company from accusations of “land-grabbing”, claimed NGOs had exaggerated its land purchases in Ghana fiftyfold, and said it had set aside 40% of its leased land for use by locals. He said the real problem of “land-grabbing” in Africa was in fact the occupation by squatters.

Who outside of Ghana – whether on a panel in Kiel, an NGO’s office in New York or a research institute in Rio de Janeiro – could verify this? More generally, how often are claims merely copy-pasted for the sake of sexy headline by NGOs and media? How often are the companies themselves, always the most informed participants, abusing public confidence for the sake of private profit?

The changes of the information age are something of a double-edged sword in this regard: In their struggle to cut costs traditional media have been drastically curtailing foreign reporting and investigative journalism. At the same time, the radically democratizing effect of blogging and online media open up vast avenues for citizen journalism. Never before have there been such opportunities for rural people to document and publicize the issues they face.